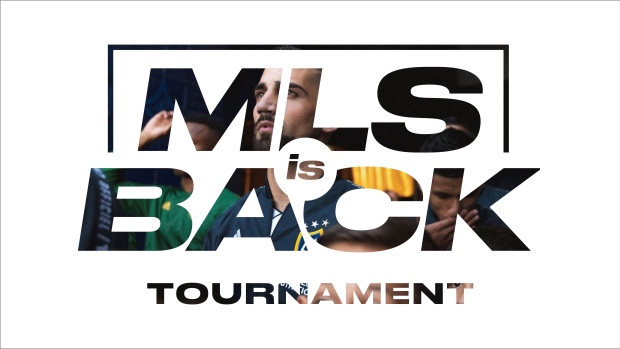 A MLS logo is shown in this handout image. Major League Soccer will return to action July 8 with a World Cup-style tournament that will run through Aug. 11 in the Orlando area. All 26 teams will take part in the "MLS is Back Tournament" at the ESPN Wide World of Sports Complex at Walt Disney World Resort in Florida beginning July 8. THE CANADIAN PRESS/HO-MLS

Rivals will be reunited in Florida as Toronto FC was drawn with the Montreal Impact in Group C at the “MLS is Back Tournament.”

The two Canadian teams are joined by D.C. United and the New England Revolution.

The Vancouver Whitecaps also found themselves facing a regional rival, placed in Group B along with the seeded Seattle Sounders, FC Dallas and San Jose Earthquakes.

The 54-game World Cup-style tournament runs July 8 through Aug. 11 at the ESPN Wide World of Sports Complex at Walt Disney World Resort in the Orlando area.

The draw was conducted by conference, with three groups from each.

Each team will play three group games, which will count in the regular-season standings. The top two in each of the six groups plus the four-best third-place finishers advance to the knockout round of 16.

The MLS tournament, which will be played before empty stands, marks a resumption to the league's 25th season, which was halted March 12 after two rounds due to the COVID-19 pandemic.

The hope is the league, once the Florida tournament is completed, can continue the regular season with a revised schedule in home markets.

The draft was a low-key affair conducted online with former U.S. international Charlie Davies using what looked like a salad bowl to pull red balls out of to match seeded teams with their groups.

Officials from the seeded teams then called out numbers and Davies opened up the requested balls to unveil the teams in their group.