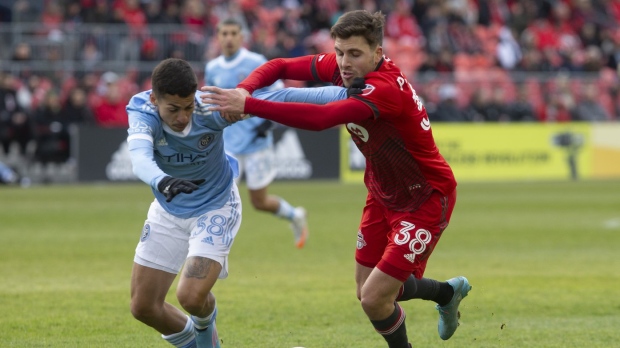 Toronto FC has traded fullback/midfielder Luca Petrasso to Orlando City SC in a deal that could net TFC up to US$400,000 in allocation money. Petrasso (right) challenges for the ball with New York City FC’s Gabriel Pereira during second half MLS action in Toronto on April 2, 2022. THE CANADIAN PRESS/Chris Young

Toronto FC has traded fullback/midfielder Luca Petrasso to Orlando City SC in a deal that could net TFC up to US$400,000 in general allocation money.

“Luca is a very technical player that can play anywhere on the left side of our formation, from left back to out on the wing,” Orlando GM Luiz Muzzi said in a statement. “While just 22, he has solid experience at the senior level and he’ll provide immediate strength for us at the position, with a lot of potential for growth.”

Petrasso made 27 appearances for Toronto since signing as a homegrown player in January, becoming the 27th player in club history to sign for the first team from the TFC academy.

He had four assists in 23 league games, including 21 starts, and was part of the Toronto team that won the pandemic-delayed 2020 Canadian Championship final against Forge FC in June.

The Toronto native has represented Canada at youth level.