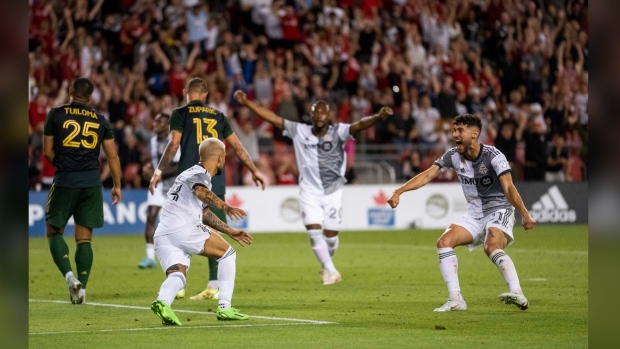 Captain Michael Bradley set up Insigne’s tiebreaking goal in the 79th minute, scooping the ball into the penalty box toward Insigne.

After a save by Portland goalkeeper Aljaz Ivacic on substitute Ayo Akinola, Bernardeschi scored on curling left-footer in the 85th.

Toronto FC (8-12-5) is 3-0-1 since the Italian duo took the field. Bernardeschi (three goals and two assists) and Insigne (two goals and one assist) have been involved in eight of Toronto’s last 10 goals.

“Look, these guys bring some special qualities,” Toronto coach Bob Bradley said. “When you have good players, it doesn’t take long for other good players to size them up.”

Jonathan Osorio scored for Toronto in the 41st minute. Josecarlos Van Rankin tied it for Portland (7-7-12) in the 73rd with his first MLS goal.

Portland was 4-0-6 during the streak.

“It’s painful, but I think there’s a lot to learn from this game,” Portland coach Giovanni Savarese said. “I believe we played a decent match. I felt that in moments not everyone was putting the same amount of work that needed to be put in. Nevertheless, we were still able to defend well the majority of time and create moments offensively.”