Anderson, Pezzetta each score twice for Canadiens in 5-2 pre-season win over Leafs 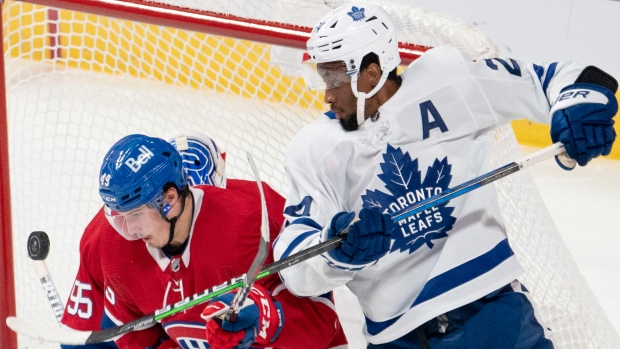 Anderson score twice, Dvorak collected his first goal for Montreal and assisted on three others, and Drouin picked up a pair of assists in a 5-2 pre-season win Monday over the visiting Toronto Maple Leafs.

Michael Pezzetta also scored twice for the Habs, including an empty-net goal.

The Canadiens acquired Dvorak from the Arizona Coyotes earlier this month in exchange to two picks, including a first-round selection, in next year's draft.

Jake Allen stopped all 15 shots he faced in Montreal's net before giving way to Kevin Poulin, who turned away 20 of 22.

David Kampf with a short-handed goal and Ondrej Kase replied for the Maple Leafs.

Toronto's Jack Campbell allowed three goals on 12 shots over half a game.

Reliever Petr Mrazek turned away seven of eight shots. Mrazek denied Anderson a hat trick with a glove save late in the third period.

Anderson and Dvorak both scored power-play goals in the opening period and Pezzetta made it 3-0 near the midway point of the second.

Poulin, who had just replaced Allen, turned the puck over to Toronto's Kampf for an easy short-handed goal at 11:15.

Anderson produced a second power-play goal in the period.

Kase cut the deficit to two on a feed from Morgan Reilly just before the intermission, but Toronto didn't score again in the game.

This report by The Canadian Press was first published Sept. 27, 2021.