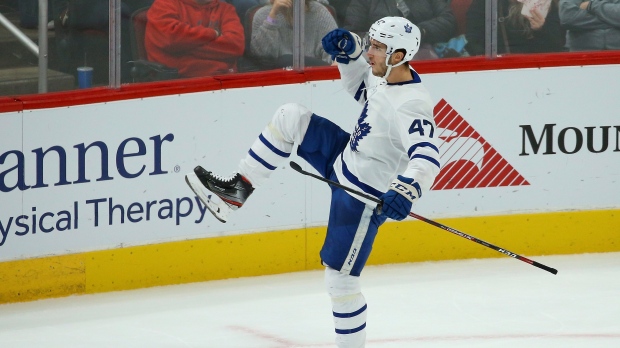 GLENDALE, Ariz. - Tyson Barrie scored his first goal of the season and Pierre Engvall got the first of his career to lift the Toronto Maple Leafs to a 3-1 win over the Arizona Coyotes on Thursday night.

Auston Matthews also scored early in the third and Frederik Anderson stopped 30 shots to help the Maple Leafs snap a six-game losing streak (0-5-1) and win in Sheldon Keefe's coaching debut. Keefe took over for the fired Mike Babcock on Wednesday.

Barrie got the scoring started with 46 seconds left in the first period, beating Kuemper under the right glove after coming down the right side from the point with open ice.

The Coyotes had trouble generating offence, as the Maple Leafs dominated the puck. Anderson was forced to make a glove save midway through the first on Carl Soderberg, and made a clean save of Jason Demers' shot on a break in the second off a feed from Phil Kessel.

Engvall scored short-handed after breaking up a point-to-point pass and beating Kuemper under his left leg with his left-handed shot with 3:11 remaining in the second.

Matthews made it 3-0 as he skated far side and beat Kuemper between the legs 48 seconds into the third period.

Maple Leafs: At Colorado on Saturday night for the fourth game of a six-game trip.

Coyotes: At Los Angeles on Saturday.