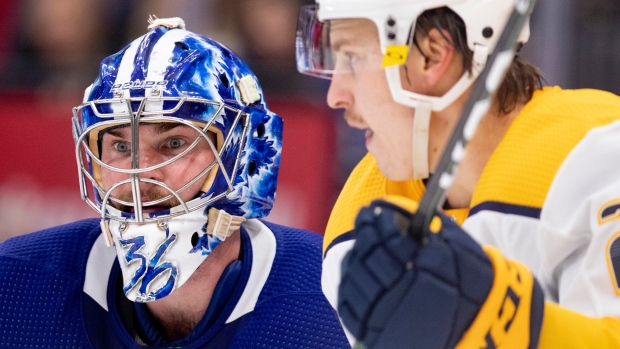 TORONTO - Jack Campbell made 24 saves to register his third shutout of the season as the Toronto Maple Leafs defeated the Nashville Predators 3-0 on Tuesday night.

Auston Matthews, David Kampf and Mitch Marner, into an empty net, scored for Toronto (11-5-1), which has won nine of its last 10 games. Matthews and Kampf both added assists.

Campbell, who picked up his seventh career shutout in his 100th regular-season NHL game, improved to 9-3-1 on the campaign.

Nashville was at Scotiabank Arena for the first time since March 12, 2020, when they were supposed to play the Leafs that night before the NHL suspended its schedule because of the COVID-19 pandemic.

Toronto, which honoured Dion Phaneuf before puck drop after the team's former captain announced his retirement earlier Tuesday, jumped out to a 1-0 lead at 7:37 of the opening period after Nashville hit the post a minute in.

William Nylander, who saw his six-game point streak snapped in Saturday's 5-4 victory over the Buffalo Sabres, found Matthews with a cross-ice pass, and he beat Saros shortside for his seventh goal of the season.

Matthews had another great chance on a 2-on-1 break with Mitch Marner after Nick Ritchie levelled Predators defenceman Mattias Ekholm along the boards, but Saros stretched to make an outstanding stop.

Nashville winger Michael McCarron then immediately challenged Ritchie to a fight for the hit on Ekholm - an invitation the bruising Leafs forward was happy to oblige.

Leading the Predators with nine goals, Matt Duchene rang a shot of one of Campbell's posts a minute into the middle period as the visitors found iron a second time.

Nashville got a power play after Ritchie took a retaliation slashing penalty, but Campbell, who was makings his 100th NHL start, denied Roman Josi from the slot.

Toronto appeared to go up 2-0 at 4:35 on a scramble in front, but Matthews' shot hit the crossbar and post and stayed out on a sequence that was originally called a goal on the ice.

Nashville hit another post early in the third when Thomas Novak came close on a backhand as Campbell was again bailed out by the iron.

Saros then denied Nylander on a break to keep the Predators within one with the team's playing 4 on 4.

Campbell kept his shutout bid alive midway through the period when he stopped Josi again from in close.

The Leafs couldn't get anything going on a power play with six minutes left in regulation, with Ritchie coming closest on the doorstep.

But Kampf sealed it with his third with 3:56 left off a pass from Ondrej Kase, and Campbell shut the door from there before Marner scored his fourth into the empty net.

Notes: Toronto reacquired Kyle Clifford from St. Louis for future consideration on Tuesday. The Leafs originally traded for the grinding winger along with Campbell from the Los Angeles Kings in February 2020. ... Toronto hosts the New York Rangers on Thursday before welcoming the Pittsburgh Penguins on Saturday to wrap up a stretch of nine of 11 games at Scotiabank Arena. ... The Predators were supposed to play Thursday in Ottawa, but that game was among the three postponed this week because of the Senators' COVID-19 outbreak. Nashville visits the Montreal Canadiens on Saturday.