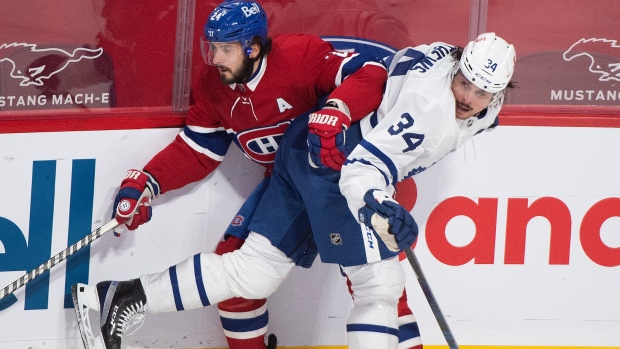 The rookie sniper took a pass from Jeff Petry and wired home his second NHL goal - and second OT winner in as many games.

Tyler Toffoli and Philip Danault scored in regulation for Montreal (24-18-9). Jake Allen made 27 stops for the Canadiens, who entered having won two a in row, including Saturday's dramatic 2-1 overtime triumph at the Bell Centre against the Ottawa Senators when Caufield was also the hero. Petry and Nick Suzuki added three assists each.

Auston Matthews, with his league-leading 39th goal of the season, and Morgan Rielly replied for Toronto (33-13-6), which got 20 saves from Jack Campbell.

The first-place Leafs fell to 5-3-0 against the Canadiens, who are chasing the Winnipeg Jets for third in the division.

The Leafs and Canadiens will play twice more this week - Thursday and Saturday in Toronto - although Montreal also has a date with the Senators in Ottawa on Wednesday.

The Canadiens were once again minus injured No. 1 goalie Carey Price, captain Shea Weber, as well as forwards Tomas Tatar, Paul Byron and Brendan Gallagher, while winger Jonathan Drouin remains out for personal reasons.

Leafs defenceman Justin Holl didn't dress after taking a puck in the face Saturday, which opened the door for Timothy Liljegren to draw in on the second blue-line pair with Jake Muzzin. Zach Hyman and Zach Bogosian also remain sidelined with injuries.

Down 2-1 late in the third period, Danaut jammed his fifth home with 51.8 seconds left in regulation after beating Matthews on an offensive zone faceoff.

Toffoli missed the net on a breakaway in extra time looking for his second goal of the night before Matthews and Mitch Marner couldn't connect on a 2-on-0. John Tavares then hit the post for Toronto.

Matthews snapped a 1-1 tie with 2:39 left in the second, tipping Muzzin's point shot past Allen as he battled in front with Canadiens defenceman Joel Edmundson.

The goal was Matthews' sixth in as many contests, 18th in his last 18 games, and 18th in 22 career outings versus the Canadiens.

Toffoli got Montreal on the board earlier in the period on a power play when he took a pass from Suzuki and beat Campbell for his 28th at 1:55 on Toronto's third penalty of the night.

The visitors got their first man advantage not long after, but Campbell had to make a big stop off Artturi Lehkonen on a 2-on-1 with Jake Evans following a Rasmus Sandin turnover.

Allen stopped William Nylander on a breakaway later in the period, but Matthews wouldn't be denied on his deflection.

Montreal looked to push in the third, with Campbell denying Ben Chiarot on a delayed penalty before stopping Josh Anderson at the side of his net before Danault forced OT late.

Rielly opened the scoring at 4:07 of the first on a point shot through a screen for his fifth goal of the season, and first in 13 games. The sequence was set up by Alex Galchenyuk, who registered his first-ever point against Montreal in his 10th game against the team that drafted No. 3 overall in 2012.

Montreal came close to getting on the board later in the period when Caufield rang a shot off Campbell's crossbar on the power play. Toronto almost made it 2-0 seconds later when Marner stole the puck from Alexander Romanov, but Allen got a piece of the breakaway chance.

Campbell then robbed Jesperi Kotkaniemi with his glove on another man advantage before also denying Eric Staal.