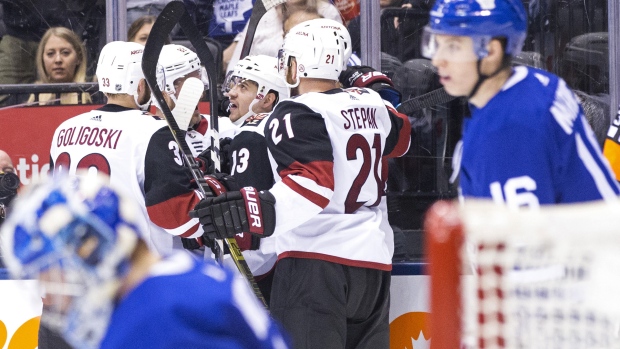 TORONTO - Mike Babcock felt his team didn't have a lot of luck. John Tavares thought there were a lot of things to build on.

But in the end, all Sunday amounted to was another loss for the scuffling Maple Leafs.

Vinnie Hinostroza scored the winner in the third period as the Arizona Coyotes downed Toronto 4-2, sending the home side to its seventh defeat in the last 10 games.

The Leafs controlled the play for long stretches with 76 shot attempts compared to the Coyotes' 51, but saw 30 of their efforts blocked.

Clayton Keller, Mario Kempe and Lawson Crouse, into an empty net, had the other goals for Arizona (22-22-4). Darcy Kuemper stopped 25 shots. Crouse also had an assist.

Tavares and Travis Dermott replied for Toronto (29-17-2), which got 27 saves from Frederik Andersen.

Toronto is just 13-11-1 at home - including 1-6-0 over its last seven - following a fourth straight regulation loss at Scotiabank Arena.

Dermott said the talented Leafs, picked by many to contend for the Stanley Cup in the spring, could use some extra urgency in their game.

“Knowing what you can do and going out and doing it is definitely a different thing,” said the rookie defenceman.

Toronto currently sits just a point up on Boston and Montreal for second in the Atlantic Division, although the Leafs do have games in hand.

“We've had some really good looks,” Tavares said. “This is a great challenge of character and just a great opportunity to find a way to figure it out, solve that puzzle of getting to where we need to get to.”

The Coyotes, meanwhile, are 8-0-1 in the franchise's last nine trips to Toronto and improved to 5-1-1 over their last seven.

“We're really finding our identity here and how we want to play as a team,” Hinostroza said.

After the Leafs tied the game at 3:12 of the third when Tavares ripped his 30th goal of the season to awaken a slumbering Scotiabank Arena, the Coyotes came right back on Hinostroza's fifth - a bank shot off down-and-out Andersen at 6:44.

Toronto defenceman Morgan Rielly hit the post at the other end moments later - one of three occasions the Leafs found iron. Playing their third game in four nights following Friday's 3-1 road loss Florida, the Leafs pushed for an equalizer, but Crouse iced it into an empty net with his eighth.

“We played the right way,” Keller said. “We came out a little bit slow, but I think when we settled down a little bit and stuck to our game plan.”

Down 1-0 after the opening 20 minutes, the Coyotes tied it at 2:16 of the second when Kempe moved in alone and deked to the forehand before depositing his third.

Josh Archibald nearly made it 2-1 for the visitors later in the period when Andersen's clearing attempt hit the Coyotes forward in the face and nearly ricocheted in, but the Leafs goalie recovered to kick out his right pad.

Keller eventually gave his team its first lead with 4:41 left in the period when he fired a laser shortside under the crossbar from a tough angle for his 11th.

“Hell of a shot,” Andersen said.

The Leafs then lost winger Andreas Johnsson to a concussion after he took a hit from Arizona defenceman Niklas Hjalmarsson. Babcock said Johnsson won't be available when the Leafs host Washington on Wednesday, their last game before the NHL all-star break.

Toronto's power play - just 6 for 51 over its last 20 games coming in - went to work late in the second, but the NHL's No. 1 penalty-killing unit held firm.

A target of boos during a 6-3 home loss to Colorado last Monday and again by a section of travelling fans in Thursday's 4-2 road victory over first-place Tampa Bay, Leafs defenceman Jake Gardiner sat out with back spasms.

That opened the door for Dermott to move into Toronto's top-4 on the blue line alongside Nikita Zaitsev, who like Gardiner has struggled in recent weeks.

The Leafs went up 1-0 at 11:45 of the first when Dermott took a pass from William Nylander and whipped a shot from the point through traffic for his third, and first since Dec. 8.

“Teams go through speed bumps,” Dermott said. “It's just trying to figure it out and working back to that best game.”

Nylander, who came in with just one goal in 19 games since ending his contract impasse Dec. 1, was bumped to the fourth line. The assist on Dermott's opener was Nylander's first point since Jan. 3, snapping a stretch of seven games.

Connor Brown was promoted to Nylander's spot in Toronto's top-6 forward group to start the evening alongside Johnsson and Auston Matthews - another star struggling to find his offensive rhythm with only one goal in his last 13 outings.

“We're going through some adversity,” Matthews said. “Hopefully in the long run this is something good for us and we learn from it.”

Notes: Gardiner is listed as day-to-day. ... The Coyotes visit Ottawa on Tuesday and Montreal on Wednesday.