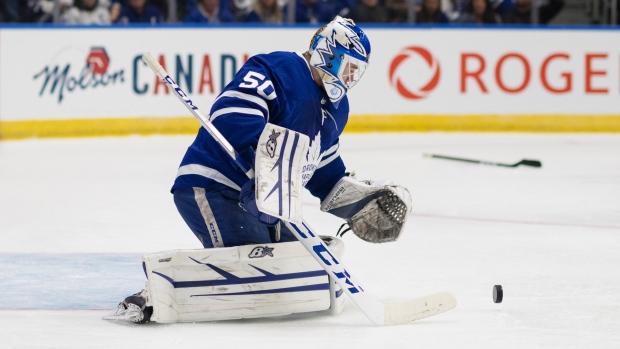 What's certain, however, is that Toronto will be minus its most important player for at least one game because of a neck injury.

And if his absence drags on and the Leafs' internal options aren't able to carry the crease load, general manager Kyle Dubas might be forced to act with the NHL trade deadline less than three weeks away.

Andersen was contacted twice in the first period of Monday night's demoralizing 5-3 home loss to the Florida Panthers -- once by defenceman-turned-forward Mark Pysyk and again during another sequence a few minutes later when Frank Vatrano got tangled up with Toronto blue-liner Jake Muzzin and accidentally slid into him off the rush.

The 30-year-old netminder finished the period and passed a concussion test, but didn't come out after the intermission and wasn't on the ice for practice Tuesday ahead of Wednesday's game in New York against the Rangers.

"At this point they're diagnosing him with a neck injury," Leafs head coach Sheldon Keefe said. "He's not going to travel.

Andersen has once again been Toronto's backbone this season with a 24-9-6 record, .910 save percentage and 2.87 goals-against average. The Dane's 24 victories rank second in the NHL, behind only Tampa Bay netminder Andrei Vasilevskiy's 26 heading into Tuesday night's action.

"It's tough to lose him like that," Keefe said. "But these things happen, they've happened before for this team."

Toronto backup Michael Hutchinson allowed three goals on 13 shots in relief against Florida as the Leafs blew a 3-1 third-period lead against their Atlantic Division rivals to tumble out of a playoff spot in the Eastern Conference.

Only one of the goals could be firmly pinned on Hutchinson, who experienced a rough opening to the season under former head coach Mike Babcock, but has four victories and a .948 save percentage in his last four starts.

"We've developed some real confidence in Hutch when he's gone in as a starting goaltender," Keefe said. "We've just got to keep this thing moving along."

But the 29-year-old from Barrie, Ont., has three losses and a .783 save percentage in his last three relief outings.

"You move past the day before and you don't look back," Hutchinson said. "You just focus on the next day and working and trying to improve and get better.

"Being able to do that has helped get myself get back on track."

"This year my mental approach going into games, being relaxed and clear-headed and just letting the game come to me, is the biggest thing," he said. "Hopefully everything works out."

"I learned a lot about myself," he said of his roller-coaster campaign. "Not even just myself, the people around me. This organization's supported me extremely well this year. Family's been amazing, close friends have been all very supportive."

The Leafs also recalled Kasimir Kaskisuo from the Toronto Marlies of the American Hockey League on Tuesday to serve as Hutchinson's No. 2 in the Big Apple.

"I'm going hour by hour at this moment," said the 26-year-old Finn. "Just trying to enjoy it."

Kaskisuo made his only NHL appearance in November when he allowed six goals in an ugly loss to the Pittsburgh Penguins. In 23 AHL games this season, he's 12-7-2 with a .912 save percentage and a 2.67 GAA.

"He's a guy that enjoys big moments, enjoys challenges," said Keefe, who coached both Hutchinson and Kaskisuo with the Marlies. "Last season he had a real up-and-down season (in the AHL), but down that the stretch and certainly into the playoffs he was outstanding."

After playing in New York on Wednesday, the Leafs host Anaheim on Friday before visiting Montreal on Saturday.

If things start to go sideways and Andersen isn't back, Dubas might have to look at goalie options via trade.

There are veteran names out there -- Ottawa's Craig Anderson and Anaheim's Ryan Miller -- and younger options like Pittsburgh farmhand Casey DeSmith and Alexandar Georgiev of the Rangers, but Toronto would need to move salary out to get anyone of consequence on the books.

For now, the Leafs can only focus on what's right in front of them. Despite the crushing setback against Florida in a game the home side dominated for two periods, Toronto has responded well from a 1-3-2 stretch before the bye week and all-star break with six out of a possible eight points.

"The two points we haven't gotten might have been the best game that we played out of the four," Keefe said. "Regardless of who's in or out, we have more to give as a team and we want to continue to build.

"We've just got to keep pushing along."

For one night, and possibly longer, that's with Hutchinson and Kaskisuo.

This report by The Canadian Press was first published Feb. 4, 2020.