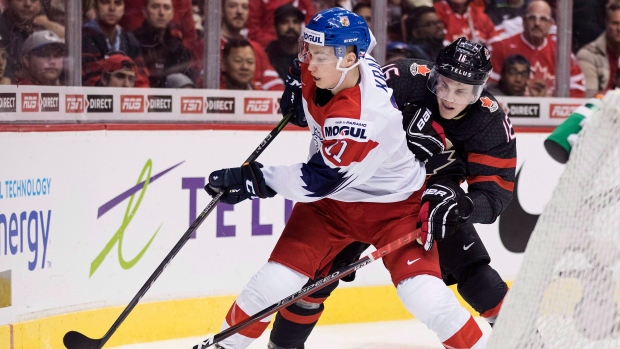 Kral, 20, appeared in 54 games with the Western Hockey League's Spokane Chiefs during the 2019-20 season and registered 49 points (12 goals, 37 assists), which ranked second among Spokane defenceman and tied for 10th among WHL defenders.

In 154 career WHL regular season games, Kral recorded 120 points (31 goals, 89 assists), while adding a pair of assists in 17 playoff games. He represented the Czech Republic at the 2018 and 2019 world junior hockey championships.

Kral was originally drafted by the Maple Leafs in the fifth round (149th overall) of the 2018 NHL draft.

Rubins, 22, appeared in 47 games with the American Hockey League's Toronto Marlies during the 2019-20 season and registered 14 points (two goals, 12 assists). In 2018-19, he split his season between the Marlies and the Newfoundland Growlers (ECHL).

The Riga, Latvia native recorded three assists in 15 games with the Marlies in 2018-19, while recording two goals and 16 assists in 56 games with the Growlers. Rubins played in 17 playoff games with Newfoundland and recorded a goal and two assists, capturing the Kelly Cup in the franchise's inaugural season.

Rubins originally joined the Maple Leafs organization on Aug. 3, 2018 after signing with the Growlers.