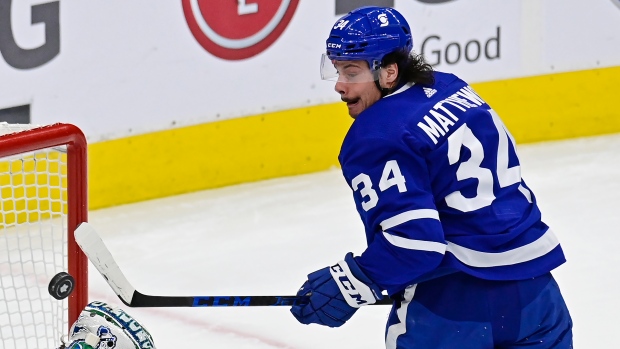 Toronto Maple Leafs star Auston Matthews is expected to miss the first three games of the regular season as he continues to recover from wrist surgery.

The 24-year-old centre, who had surgery on Aug. 13th, said his wrist isn't yet where he'd like it to be to play.

“We're taking it day by day and lots can change, but as of right now this week is probably out of the question. But you never know what could happen,” Matthews said after practice Monday.

Matthews had 41 goals in 52 games last season to lead the NHL, but missed four games with a wrist injury.

Toronto hosts the Montreal Canadiens on Wednesday to open the regular season, then has two games against the Senators - on Thursday in Ottawa, and at home on Saturday.

Maple Leafs coach Sheldon Keefe said he wasn't expecting Matthews to be available for the first three games. Toronto's fourth game is against the visiting New York Rangers on Oct. 18.

“Auston is not at the point right now where he is feeling comfortable playing,” Keefe said.

Ilya Mikheyev is expected to be out eight weeks after suffering a thumb injury on Saturday that will require surgery.

Matthews said his recovery progress has “been great,” and that he's “dying” to get in and play.

“Physically I feel great out there,” he said. “I feel like in the last month or so I've been able to get in some really good work with the skills coaches, working on different parts of my game. I just don't personally feel like I'm at the point where I'm 100 per cent comfortable to play, that's really all it is. I feel good physically and everything, I think I need a little bit more time.”

Keefe said he looks forward to Matthews being healthy after not playing at 100 per cent last season due to the wrist injury.