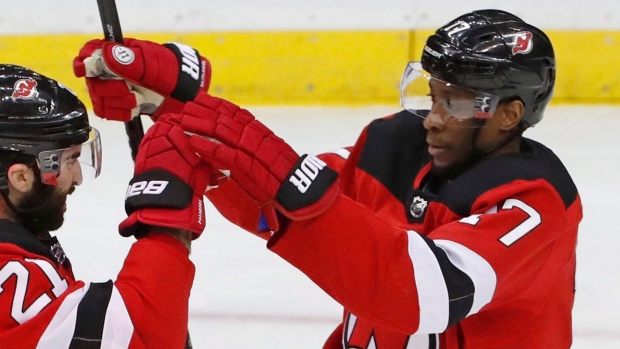 By the time the sun went down, they had addressed a big need on their blue line.

“It's a great team. Close to home, close to family. Definitely excited to see what happens,” Brodie said in a conference call.

“They're a great team, playing against them this year they're fast, skilled... It's a tough team to play against. I just hope to add to that and whether that's moving the puck, or just in the defensive zone, I'm pretty much up for anything and I hope to contribute and make them better.”

Simmonds addresses Toronto's desire for more toughness and sandpaper up front, while Brodie - a left shot who plays the right side - should slot onto the Leafs' No. 1 pairing with Morgan Rielly.

“He's a great player, he's similar to (Flames captain Mark Giordano), one of those guys that's good at everything... I hope if I play with him I make him better,” Brodie said.

Brodie, 30, signed a four-year, US$20-million contract after spending his entire career with the Calgary Flames.

Simmonds, meanwhile, signed a one-year, $1.5-million contract to play in his hometown. The 32-year-old has 251 goals and 499 points in 909 career games with the Los Angeles Kings, Philadelphia Flyers, Nashville Predators, New Jersey Devils and Buffalo Sabres over his 12 NHL seasons.

“In the role that I'm being brought in with Toronto, I think it's obviously to bring in some toughness,” he said on a video conference call from his car with reporters. “But at the same time, I think I'm a pretty good hockey player myself.

Toronto has also been linked with St. Louis Blues defenceman Alex Pietrangelo - the biggest fish in this year's free-agent pond - for some time, but barring a major trade, Brodie's signing would appear to have shut the door on that possibility in a world where the salary cap is expected to stay flat at $81.5 million because of the COVID-19 pandemic's economic realities.

Leafs general manager Kyle Dubas confirmed Friday afternoon before the Brodie deal was announced that he'd spoken to Pietrangelo's agent, Don Meehan, but that's as much information as he was willing to divulge.

“I've not talked to Alex at this point,” said the GM. “They know where we stand and what our interest is, and also where our limitations are.”

Dubas added that he would continue to look at upgrading his defence corps in both free agency and via trade.

“There are options,” he said. “We're exploring both, as I think we have to.”

Turns out the answer was Brodie.

As for Simmonds, Dubas said earlier this week he wants his talent-rich roster to be harder to play against, and the six-foot-two, 185-pound forward - along with his 1,123 career penalty minutes - should help support the likes of Auston Matthews, John Tavares, Mitch Marner and William Nylander up front.

“We think he's going to be a very good player for us,” said Dubas, who indicated there's more work to do in that area. “We're excited to have him here as a Maple Leaf.”

Simmonds battled hip and core-body injuries the last few seasons, but said the time off related to the pandemic has provided him a “silver lining” in terms of training and preparing for next season.

“The talent level on the Leafs is unbelievable,” he added. “It's second to none in the league.

“What I'm trying to do here is just come in and play my game, play my style, don't change much and complement what the Leafs already have in place.”

Toronto was left bitterly disappointed following a five-game defeat at the hands of the Columbus Blue Jackets in the qualifying round of this summer's restart to the NHL's pandemic-delayed 2019-20 campaign.

That setback came on the heels of consecutive seven-game losses to the Boston Bruins in the first round of the playoffs in both 2018 and 2019.

Simmonds, who was given permission by Buffalo to talk to other teams prior to the opening of free agency, is the second veteran forward to sign with the Leafs in recent days after 37-year-old Jason Spezza - another Toronto native - re-upped for $700,000 in 2020-21.

“I've played a long time in this league, so I think the majority of people know what my game is,” Simmonds said. “I'm a team-first type of guy who's no-nonsense.

“I play the game hard, I think I play the game the right way and I have no problem sticking up for my teammates or being the guy who's asked to go out there and jumpstart the team if need be.”

Montreal GM Marc Bergevin confirmed he spoke to Simmonds about joining the Canadiens, but the winger instead chose his hometown club.

“He's a player we would love to have here,” Bergevin said. “He chose Toronto and we wish him the best.”

This report by The Canadian Press was first published Oct., 9, 2020.