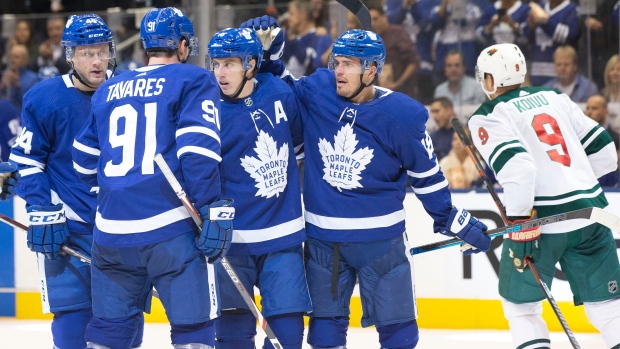 TORONTO - Mitch Marner had a goal and two assists as the Toronto Maple Leafs overcame another slow start to down the Minnesota Wild 4-2 on Tuesday night.

Andreas Johnsson, with a goal and an assist, and John Tavares and Auston Matthews also scored for Toronto (4-2-1), while Frederik Andersen made 27 saves.

Leafs defenceman Morgan Rielly added four assists in the second period to tie a franchise record set by Rick Vaive on March 12, 1984, for the most by a Leafs player in a regular-season period.

Luke Kunin and Gerald Mayhew replied for Minnesota (1-5-0). Devan Dubnyk stopped 30 shots for the Wild, who beat the Ottawa Senators 2-0 in the nation's capital Sunday afternoon for their first win of 2019-20.

After falling behind early for the sixth time in seven games to open the schedule - and the fifth time in five home dates - Toronto exploded with four goals in the second period.

Tavares got things going at 1:58 when he wired a slapshot off the post and in on Dubnyk for his second of the season.

The goal came after head coach Mike Babcock moved Trevor Moore up to play with Tavares and Marner, while Kasperi Kapanen slid down the lineup to join Alexander Kerfoot and Ilya Mikheyev.

Marner then gave the Leafs, who visit the Washington Capitals on Wednesday in the second game of a back-to-back, their first lead on a power play at 7:17 when he took a no-look pass from Johnsson down low and fired a shot through the pads that Dubnyk could only get a piece of for his third.

The Wild, who will play 13 of their first 18 games in 2019-20 on the road, appeared to have a good chance to get back even later in the period, but Ryan Hartman pulled down Leafs defenceman Jake Muzzin with Ryan Donato off to the races on a breakaway.

Toronto made Minnesota pay just 10 seconds later when Johnsson batted a puck out of the air in Dubnyk's crease at 8:29 as the Leafs connected on two of their first three power-play opportunities after coming in just 5-for-22 on the season.

The home side then went up 4-1 at 13:05 when Matthews scored his seventh on a pretty give-and-go with Marner off the rush by burying his own rebound after Dubnyk, who entered 0-4-0 with a 4.56 goals-against average and .862 save percentage, made the initial stop after an awkward Wild change.

Andersen didn't have a ton to do at the other end, but was called upon to stop Marcus Foligno on a breakaway in the final minute of the second after the Leafs' fourth line and third defence pair got caught being too aggressive in the offensive zone.

The Leafs goalie then had to be sharp five minutes into the third on 3-on-1 break when he robbed Zach Parise after Toronto turned the puck over on an odd-man rush of their own.

Johnsson nearly got his second later in the period, but his blast from the hash marks rattled the crossbar and stayed out.

Mayhew, who was making his NHL debut, scored late for the Wild as Toronto improved to 2-2-1 at home and picked up its first victory at Scotiabank Arena since beating Ottawa in the season opener.

Having played just once at home so far this season, the Wild opened the scoring at 5:29 of the first after Dubnyk stopped William Nylander on a break and killed off an early penalty.

Kunin got the puck at the top of the faceoff circle and fired a shot that Andersen could only get a piece of with Joel Eriksson Ek screening in front for his second.

The Leafs, who snapped a 0-2-1 stretch with Saturday's 5-2 road victory in Detroit over the Red Wings, had a couple of opportunities to get even, including a decent chance off the stick of Matthews, but Dubnyk was there before the floodgates eventually opened after the intermission.

Notes: Mayhew, a 26-year-old product of Ferris State University and a veteran of 164 American Hockey League games, did a solo lap before warmups. ... Minnesota visits Montreal on Thursday before hosting the Canadiens on Sunday.

This report by The Canadian Press was first published Oct. 15, 2019.