Matthews, Nylander score in the third period as Maple Leafs down Kings 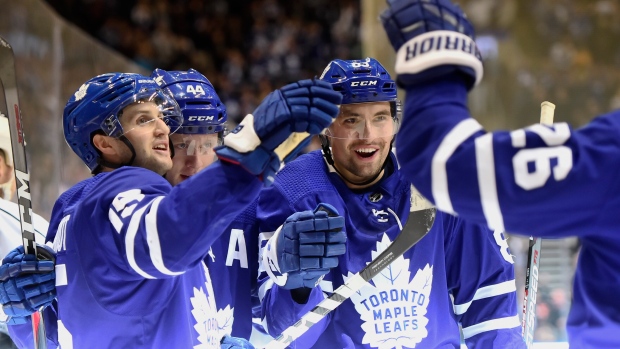 Alexander Kerfoot had the other goal for Toronto (8-5-3), which got 24 stops from Frederik Andersen. Matthews and Nylander each added an assist.

The Leafs had captain John Tavares back in the lineup after he missed the last seven games with a broken finger.

Matthews snapped a 1-1 tie with 7:24 left in regulation when Andreas Johnsson sent a pass in front that went off Nylander and right to the Leafs' centre, who buried his 12th goal of the season.

With fans at Scotiabank Arena still celebrating, Nylander moved in on a 2-on-1 with Matthews and outwaited Quick and Kings defenceman Sean Walker before roofing his fourth at 6:54.

Toronto, which went 3-2-2 without Tavares, including Saturday's 4-3 shootout victory at Philadelphia that went a team-record 11 rounds, got a power play to start the third after Alec Martinez went off for tripping to end the second, but Quick stretched to rob Matthews off a feed from Mitch Marner.

Martinez found himself down low on Andersen with nine minutes left in regulation, but the defenceman sent his backhand wide.

Quick then snapped out the glove to deny Leafs blue-liner Travis Dermott off a Kasperi Kapanen feed before Matthews gave the Leafs the lead on the next shift.

The Kings opened the scoring at 5:40 of the second with Kerfoot in the penalty box for interference when Anze Kopitar's initial shot off the end boards popped out the other side to Iafallo, who quickly tucked his fifth behind Andersen.

The Leafs got even with 6:31 left in the period when Walker turned the puck over just as teammates Kyle Clifford and Trevor Lewis collided in the defensive zone. The seas parted for Kerfoot, who moved in alone and fired his fifth past Quick.

Toronto defenceman Jake Muzzin - acquired from the Kings in January for winger Carl Grundstrom, prospect Sean Durzi and a 2019 first-round pick - played his first game against his former team and took a penalty late in the second for interference.

But the Leafs had the best chance when Ilya Mikheyev broke in shorthanded only to be denied by Quick before Marner couldn't find the range on the follow-up.

Toronto held a 25-9 edge in shot attempts in a mostly sleepy opening 20 minutes that saw one big hit and one big chance.

Kerfoot was flattened by Jeff Carter and went to the locker room before eventually returning to action.

The home side then got a power play later in the period when Tyler Toffoli mugged Dermott, but Tavares somehow scooped his shot up and over the Kings net from in close with Quick at his mercy.

Notes: Toronto was just 2 for 22 on the man advantage in seven games without Tavares. ... Leafs defenceman Tyson Barrie played the 500th regular-season game of his NHL career. ... Toronto hosts Vegas on Thursday and Philadelphia on Saturday. Los Angeles is at Ottawa on Thursday before heading to Montreal two nights later. ... There was a video tribute and moment of silence before puck drop for former Leafs general manager and long-time league executive Jim Gregory, who died last week at age 83.