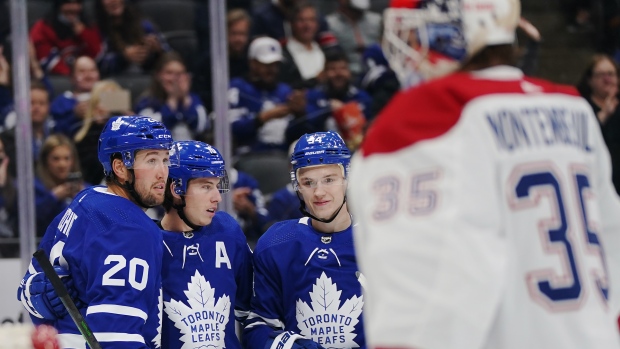 Watch out for what happens when Auston Matthews eventually joins the party.

Ritchie scored his first two goals in blue and white Tuesday as the Toronto Maple Leafs defeated the Montreal Canadiens 6-2 in exhibition play.

“Felt good, especially getting them right away,” said the bruising winger. “Good all around game for us ... we're going in the right direction.”

Ritchie signed with the Leafs this summer and was immediately placed on the top line at training camp in the spot Zach Hyman occupied before bolting for the Edmonton Oilers in free agency.

The six-foot-three, 236-pound native of nearby Orangeville, Ont., has worked well with Marner, but the duo's experienced a revolving door at centre as Matthews continues to work his way back from off-season wrist surgery following his 41-goal, 52-game campaign in 2020-21.

Ritchie, however, doubts the trio will take long to mesh once the reigning Maurice (Rocket) Richard Trophy winner closes a three-man circle that could wreak havoc with its complementary size, speed and skill.

“A player of that calibre, I don't think there'll be any trouble stepping in,” said the 10th pick at the 2014 NHL draft, who had friends and family in attendance for his first home game with the Leafs. “He's gonna be ready to rock.”

Brennan Menell and Brett Seney, with a goal and an each assist, Ilya Mikheyev and Semyon Der-Arguchintsev provided the rest of the offence for Toronto. Marner and John Tavares both added two assists.

Petr Mrazek made 20 saves for the Leafs at Scotiabank Arena, which remains at 50 per cent capacity due to COVID-19 restrictions.

Joel Armia, with a goal and an assist, and Alex Belzile replied for Montreal. Claimed off waivers Saturday from the Florida Panthers, Sam Montembeault made 38 stops in his Canadiens debut.

Toronto, which improved to 4-1-0 in exhibition play, concludes its pre-season calendar Saturday at home against the Ottawa Senators. Montreal (2-3-0), meanwhile, wrap things up Thursday at the Bell Centre versus Ottawa.

The Leafs and Canadiens open their regular seasons Oct. 13 back at Scotiabank Arena.

Montreal got on the board at 2:56 of the first period when Armia tipped Ben Chiarot's shot off Leafs defenceman Mac Hollowell and past Mrazek.

A native of Becancour, Que., looking to win the job as Jake Allen's backup to begin the season should starter Carey Price (knee surgery) remain sidelined, Montembeault was solid early before being left hung out to dry when Marner found Ritchie alone in front at 8:18 to make it 1-1.

“Mitch is a special player,” Leafs head coach Sheldon Keefe said. “He develops chemistry quite quickly on his own, finds ways to adapt his game. He has pretty strong confidence that Nick's gonna live around the net.”

“He's been great,” Leafs defenceman Morgan Rielly added of Ritchie. “He's a big guy that works hard. He gets to the net, he gets in on the forecheck. He's been extremely valuable. He's getting along great with all the guys and he seems to fit right in.”

Ritchie then added his second of the night on a power play 2:22 later when he beat Montembeault after Tavares hit the post moments earlier.

Montreal evened things with 3:28 remaining in the period on a man advantage of its own on Belzile's shot through traffic, but Mikheyev restored Toronto's lead 1:56 after that when he fired through another screen on the Leafs' 19th shot of the period.

Menell scored from the slot to make it 4-2 on another man advantage at 11:09 of the second off a pass from Tavares.

The Canadiens didn't register a shot in the period until there were less than eight minutes left in the period, but Mrazek, who played a full 60 minutes for the first time this pre-season, then had to be sharp on a couple of chances before Der-Arguchintsev scored with 3:08 remaining on the clock.

“Not a lot of action earlier in the game ... I just try to focus,” said Mrazek, who also signed in free agency. “The first goal went off (Hollowell's) ass.

“We just have to let those things go.”

Seney rounded out the scoring at 4:37 of the third after coming out of the penalty box, blowing past Belzile, and roofing a backhand on Montembeault.

“Obviously I was nervous,” said the Montreal goaltender. “It's totally different than playing in Florida.

“I had really good preparation. I felt good going into the game. Things didn't turn out very well, but I'll just keep working.”

Montreal, which trailed Toronto 3-1 in the first round of last spring's playoffs before winning three straight to stun its Original Six rival in seven games, dressed 11 projected regulars Tuesday.

The Leafs, meanwhile, had eight members of their opening night roster in the lineup - but still no Matthews, who has targeted the Oct. 13 curtain-raiser for his return.

Ritchie will have friends and family back in the stands for that one, but they're going to be mostly on their own when it comes to tickets.

“Everyone else is on their own.”