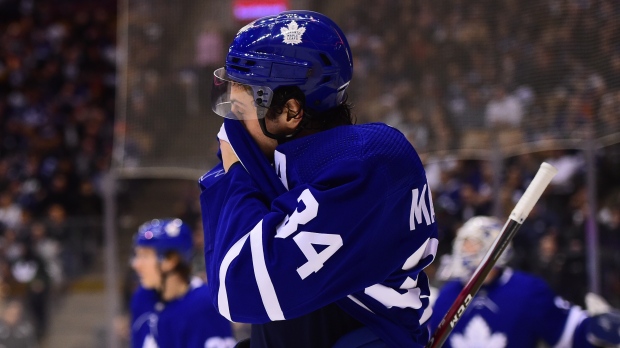 TORONTO - Mike Hoffman scored the winner and added an assist after lost Toronto lost starting goalie Frederik Andersen to injury as the Florida Panthers battled back from a 3-1 third-period deficit to defeat the Maple Leafs 5-3 on Monday night.

Mark Pysyk, with his first career hat trick, and Jonathan Huberdeau also scored for Florida (29-17-5), which got 31 saves from Sergei Bobrovsky and moved past the Leafs into third in the Atlantic Division standings on 63 points. Mike Matheson had three assists for the Panthers, who have two games in hand on the Leafs (63 points).

Auston Matthews, with his 37th goal of the season, William Nylander and John Tavares replied for Toronto (28-18-7), which saw its three-game winning streak come to an end. Mitch Marner chipped in with two assists.

Andersen started for the Leafs and stopped seven-of-eight shots in the opening period, but suffered an upper-body injury in a collision with Panthers centre Frank Vatrano about five minutes before the intermission.

He was replaced by backup Michael Hutchinson, who allowed three goals on 13 shots, to start the second with Florida up 1-0.

After Matthews gave Toronto a 3-1 lead 38 seconds into the third, Florida responded with two goals in 58 seconds before Hoffman banked his 19th off Leafs defenceman Cody Ceci and through Hutchinson's pads at 10:30 to make it 4-3.

Florida, which embarrassed Toronto 8-4 in Sunrise on Jan. 12, weathered a Toronto surge late before Pysyk completed his hat trick into an empty net to help his team to move back into an Eastern Conference playoff spot.

The Panthers were without star centre Aleksander Barkov (lower-body injury) after he was hurt in Saturday's 4-0 loss at Montreal in their first game back after the all-star break and bye week.

Leafs defenceman Travis Dermott (illness) returned to the lineup after missing Saturday's 2-1 overtime win against Ottawa, while winger Kasperi Kapanen was also back following a one-game banishment to the press box for being late to Friday's practice.

Toronto led 2-1 through two periods and went up by two early in the third when Matthews connected after Zach Hyman shovelled a pass towards the Florida net off the rush.

Matthews now sits tied with Washington's Alex Ovechkin for second in the overall goal race, and is one back of Boston's David Pastrnak.

But Pysyk got the visitors back within one at 2:20, burying his sixth on a rebound after Hutchinson whiffed on an attempted clearance.

Marner then went to the box and Florida tied it just seven seconds later at 3:18 when Huberdeau redirected a Hoffman pass from the lip of the Toronto crease.

Matthews hit the post on another Leafs power play with Bobrovsky at his mercy before the Florida goalie also blocked a follow-up one-timer from the star centre to set the table for Hoffman's winner.

Down 1-0 and minus their starting netminder after 20 minutes, the Leafs tied things on the power play at 3:21 of the second when Tavares chunked a shot from the slot off a Marner pass that fluttered past Bobrovsky for his 19th, and first in five games.

Nylander gave his team its first lead with 54.8 seconds remaining in the period just as another Florida penalty expired, redirecting a slick feed from Kapanen for his 25th past Bobrovsky, who stopped 25-of-27 shots through two periods.

Toronto had a number of opportunities to jump in front early - the Leafs led 10-0 on the shot clock 11 minutes 30 seconds into the first period before the Panthers directed their first effort on Andersen - but Bobrovsky was there every time before Pysyk put Florida in front.

Matheson moved down from his point position below the goal line and fed Pysyk, who found a soft spot between two defenders, to fire his fifth upstairs on Andersen.

Huberdeau then hit the post on a Florida man advantage, and moments later was robbed by Andersen at the side of the net.

Andersen, who watched Hutchinson pick up the victory Saturday, was hurt later in the period when Vatrano slid into the goaltender off the rush. He didn't appear to be favouring anything as he got to his feet, but Hutchinson took over to start the second.

Notes: Florida defenceman Anton Stralman, who was selected in the seventh round of the 2005 NHL draft by Toronto and played parts of two campaigns with the Leafs, suited up for the 800th regular-season game of his career. ... Toronto visits the New York Rangers on Wednesday before hosting Anaheim on Friday and travelling to Montreal on Saturday. ... The Panthers are at Columbus on Tuesday.

This report by The Canadian Press was first published Feb. 3, 2020.