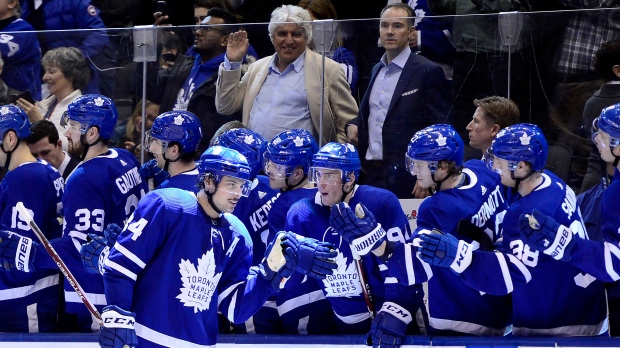 TORONTO - Auston Matthews, with his first hat trick since bagging four in his NHL debut in October 2016, led an injury-hit Toronto as the Maple Leafs beat the New Jersey Devils 7-4 on Tuesday.

John Tavares scored as part of a three-point night and Rasmus Sandin had two assists in his first game since getting called up from the minors to help reinforce the Maple Leafs' depleted defensive corps.

William Nylander and Zach Hyman, with a goal and an assist each, and Frederik Gauthier provided the rest of the offence for Toronto (25-16-6), which entered winless over its last three following Sunday's ugly 8-4 road loss to the Florida Panthers. Mitch Marner chipped in with two assists.

Frederik Andersen made 24 saves for the Leafs after getting pulled in two of his team's last three outings.

Blake Coleman, with his first-career hat trick, and P.K. Subban replied for New Jersey (17-22-7). Louis Domingue allowed five goals on 19 shots before getting yanked midway through the second period. Veteran backup Cory Schneider, who was only just summoned from the American Hockey League, came on in relief and finished with 13 saves. Will Butcher had three assists.

The Leafs started life without No. 1 blue-liner Morgan Rielly after he broke his left foot blocking a shot against Florida.

The 25-year-old has been battling a suspected lower-body ailment most of the season and hasn't scored since Oct. 25, but his absence for at least the next eight weeks is huge for a team whose back end was already minus the bruising and dependable Jake Muzzin.

Rielly is the latest key piece to go down for the Leafs, who have had to do without Tavares, Marner, Hyman, Alexander Kerfoot, Andreas Johnsson, Trevor Moore, Ilya Mikheyev and Travis Dermott at various points this season. Johnsson (leg) returned to the lineup Sunday, but Moore (concussion), Mikheyev (lacerated wrist), Muzzin and now Rielly are all on the shelf.

“The elite teams in the league don't get fazed by these types of situations,” Leafs head coach Sheldon Keefe said Tuesday morning of his depleted blue line. “We believe we are an elite team and have the ability to take big steps as a group.”

Sandin, who starred for Sweden at the recent world junior hockey championship, was promoted from the AHL's Toronto Marlies to take Rielly's place and didn't disappoint against the lowly Devils.

The 19-year-old - selected 29th overall at the 2018 NHL draft - provided the point shot that Tavares tipped home for his 18th goal of the season at 5:18 of the first period.

Toronto made it 2-0 at 9:10 after Jason Spezza won a battle behind New Jersey's net. The puck eventually found its way to Gauthier, and he wheeled in front before firing his sixth shortside on Domingue.

The Leafs then connected on their second power play of the evening in the dying seconds of the period when Hyman tipped in his 12th off another point shot from Sandin, who made his NHL debut Oct. 2 and registered two assists in six games before getting demoted, as he was being cross-checked in front.

Nylander got in on the action 2:12 into the second when he finished off a sweet feed from Pierre Engvall at the lip of the crease for his 20th to snap a four-game goal drought.

Andersen, who entered with a shaky .880 save percentage over his last eight appearances, made a nice stop on a New Jersey power play later in the period before Coleman muscled his way through score his 16th at 6:56.

Toronto, which had given up 17 goals against over a 0-2-1 stretch coming into Tuesday, got that one back on another man advantage at 10:39 when Matthews redirected a nice pass from Marner for his 32nd to make it 5-1.

Trying to work through his recent struggles, Andersen made a nice stop on Nikita Gusev early in the third and then was solid on another Pavel Zacha chance.

Schneider, who spent nearly two months in the AHL, steadied things for a time in New Jersey's crease, but a wide-open Matthews buried his 33rd on a one-timer off a Marner delivery at 3:58.

Coleman scored his second of the evening with eight minutes left in regulation and completed his first-career hat trick at 15:36 to give the winger 18 goals on the season.

Subban scored his sixth on a 6-on-3 power play with Schneider on the bench for an extra attacker with 1:58 left.

But Matthews put things to bed with 80 seconds left when he scored into an empty net for his 34th to match the centre's jersey number.

Notes: Muzzin, who broke his foot blocking a shot in New Jersey on Dec. 27, could resume skating on Wednesday. ... Sandin was named the best defenceman and a tournament all-star at the world juniors. ... Spezza became the 196th player in NHL history play 1,100 regular-season games. ... The Leafs also recalled defenceman and 2017 first-round pick Timothy Liljegren from the AHL.