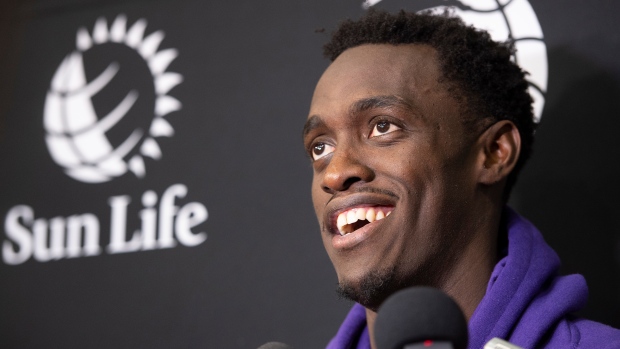 The Toronto Raptors forward sees it as an opportunity.

“This is who I am. I've always been a guy that's ready to work hard and take advantage of all the opportunities that are given,” Siakam, 25, said as the Raptors continued training camp at Laval University on Monday. “There's an opportunity for me and I'm just ready for the challenge.”

The six-foot-nine Siakam said he will be focusing on specific areas of his game as the defending NBA champs prepare for the pre-season.

He figures to be in the spotlight this season after Leonard signed with his hometown Los Angeles Clippers in free agency.

“Ball-handling and taking care of the ball. Playmaking obviously comes with having the basketball in my hands more. Obviously shooting and just trying to find that in-between game. And my force game - that's my bread and butter,” Siakam said.

Siakam averaged 19 points per game during the playoffs, second on the team.

“If you want to be one of the top scorers, you have to score in different ways,” he said. “I think that's something I learned, just trying to find ways to score. Whatever the defence is giving me, trying to take advantage of that, and being able to make a play no matter who's in front of you.”

As far as the Raptors adjusting to the loss of Leonard and Danny Green, the Cameroon-born Siakam told reporters in French “we played a lot of games without Kawhi and we know well that we are competitive and we have a good group that's more experienced so we expect to have a good season.”

The Raptors were 17-5 without Leonard last season.

“I've been hearing that a lot. I'm not sure how much higher he needs to go,” VanVleet said. “He had an unbelievable year last year and the only reason it wasn't looked at as astonishing is because he was next to Kawhi who was on a whole different planet. The biggest thing I see is him getting more double teams and triple teams. So his game is going to have to adjust. It's a journey, he's a young guy. We have to be there to support him along the way.”

Siakam was picked 27th overall in the NBA draft out of New Mexico State.

“We're continuing to expand has game, work on new things, different areas on the floor and heading him in a new and positive direction.”

The Raptors' training camp continues in Quebec City until Thursday when there will be an intra-squad scrimmage open to the public. All 3,000 tickets sold out quickly.

The team then flies to Tokyo for two pre-season games against the Houston Rockets next week.

This report by The Canadian Press was first published Sept. 30, 2019.