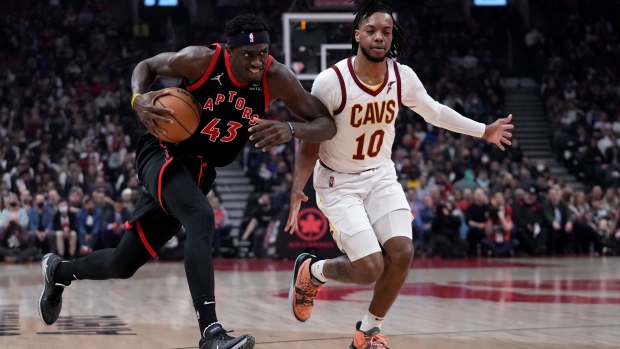 TORONTO - The Toronto Raptors will play nine games this season that will be nationally televised in the United States.

The Raptors announced their 2022-23 season schedule on Thursday, and among the highlights are two games each on ESPN and TNT and five others on NBATV.

The Raptors host the Cleveland Cavaliers on Oct. 19 to tip off their 28th NBA season, opening at home for the 11th straight year, and 22nd time in team history. Their first road game is Oct. 21 at Brooklyn.

Other season highlights include a Dec. 7 home date against LeBron James and the Los Angeles Lakers. The Raptors will host the NBA champion Golden States Warriors on Dec. 18, and last year's MVP Nikola Jokic and the Denver Nuggets on March 14.

The eighth annual Giants of Africa Game, celebrating the life of Nelson Mandela, is Dec. 5 versus Boston.

Toronto has 12 back-to-backs this season, two fewer than last season.

The Canadian broadcast schedule will be announced at a later date.