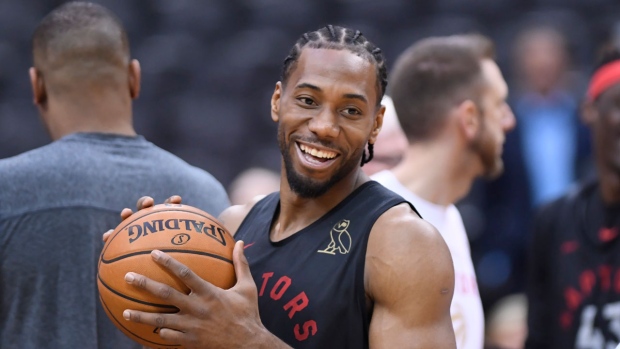 Toronto Raptors forward Kawhi Leonard smiles during a team practice for the NBA Finals in Toronto on Saturday, June 1, 2019. THE CANADIAN PRESS/Nathan Denette

A pair of billboards appealing to the heart of NBA free agent Kawhi Leonard now greet motorists driving in the Los Angeles area. The intent is to lure Leonard back to his southern California roots, specifically to join the Los Angeles Clippers.

It's the latest salvo in the war for Leonard's signature, which has intensified since the star forward led the Toronto Raptors to their first NBA title, claiming Finals MVP honours in the process, earlier this month.

If the billboard gambit seems like a desperate ploy from the pro-Clippers contingent, keep in mind that the mayor of Toronto himself was part of a hastily assembled press conference on the weekend urging Canadian fans to give Leonard some breathing room while simultaneously launching an online petition asking for signatures and pleas for Leonard to return to Toronto.

Leonard was going to be a major storyline in free agency from the moment he was traded from San Antonio to Toronto before this past season with a year left on his contract, plus a player option he will certainly decline. The possibility of him being a one-year Raptors rental who would bolt chilly Toronto for sunnier pastures once the season was over was, and still is, real.

But the story hasn't played out how some of the pundits expected. After playing just nine games with the Spurs in 2017-18, the Raptors instituted their now famous “load management” initiative, ensuring Leonard got the games off he needed during the regular season to ensure he was healthy when the playoffs started.

In his introductory press conference, Leonard said health and winning were his top priorities, and the Raptors have given him both of those. Los Angeles still offers family and weather. It seems like Leonard's decision could go either way, and as a result the battle for his services has entered into the realm of the ridiculous.

The push to bring Leonard back began in tongue-and-cheek fashion during the playoffs, with restaurants offering him free meals as part of a “Ka'Wine & Dine” campaign. Later, a real-estate firm offered him a multi-million dollar penthouse.

But Saturday's press conference that saw Toronto Mayor John Tory flanked by Raptors “superfan” Nav Bhatia lecturing local sports fandom on its inappropriate level of ardour is something that has not been seen in the city, even for the most coveted of NHL free agents. Someone in Maple Leafs forward Mitch Marner's camp must be fuming right now, wondering when his press conference pleading for a new contract will come.

The Los Angeles response from an unknown source - a Clippers spokesman told the Los Angeles Times the team had nothing to do with the billboards - is almost as absurd. One billboard features the well-known New Balance billboard ad, featuring Leonard clad in the company's apparel next to the slogan “King of the North.” The words “The North” are crossed out in red spray paint and the word “SoCal” is crudely scrawled nearby. Underneath is the hashtag “KAWHI2LAC” with the No. 2, his uniform number, highlighted in red.

The other is a California license plate with “KAWHI” in bold blue letters over the hashtag “#ClippersNation.” For reasons unexplained, the white license plate is set atop a red background, a colour scheme not unlike the Canadian flag. One would be forgiven for believing the billboards to be the result of an amateur Photoshop project had the L.A. Times not confirmed their existence.

Leonard been a dominant figure in Toronto since the season ended with the Raptors hoisting the Larry O'Brien Trophy. His arrival at a recent Toronto Blue Jays game literally stopped the action on the field as fans gave him a standing ovation.

The adulation has bordered on the creepy, with pictures of him buying boxes at Home Depot, eating at the Cactus Club Cafe and vacationing in Niagara Falls, Ont., surfacing on social media. These invasions of his privacy was a big part of the weekend press conference, even though Leonard famously ignores social media.

Taking all the oversized gestures out of the equation, the fact remains that the Raptors have put themselves in a good position to bring Leonard back for another run at a title.

Wherever he signs, it won't be because of a petition or billboard.