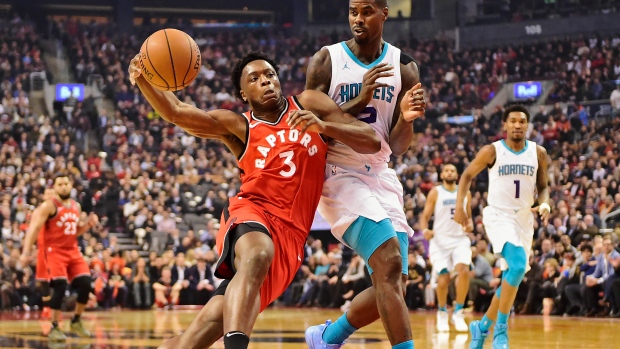 TORONTO - OG Anunoby had a strong night cut short by another eye injury on Monday.

The Raptors forward scored 16 of his 24 points in Toronto's big third quarter, and the Raptors went on to rout the Charlotte Hornets 132-96.

The Hornets hung around throughout the first half but the Raptors finally shook them in the third quarter, outscoring Charlotte 32-18 in the frame.

Anunoby, who shot 4 for 5 from long distance in the third, took an elbow in the eye from Nicolas Batum with 53 seconds to play in the quarter. Anunoby, who missed all of Toronto's championship playoff run last season after an emergency appendectomy, missed the better part of two games on the Raptors' recent road trip when he was whacked in the eye by Kawhi Leonard and suffered a contusion.

Leading 92-74 to start the fourth, coach Nick Nurse emptied his bench, and when Davis drilled back-to-back three-pointers, the Raptors led 113-80. Davis contributed 16 straight points for Toronto in a span of three minutes and 41 seconds.

Rookie Dewan Hernandez played his first regular-season minutes for the Raptors. He finished with two points and four rebounds in six minutes.

The Raptors were back home after winning three of five games on the road, despite key players to injury. Nurse said pre-game there was no update on Kyle Lowry, who remains sidelined with a broken left thumb. Serge Ibaka has missed five games with an ankle injury.

Lacking in numbers, the trip was a chance for some of the bench players to shine.

“You get to see some guys that maybe you wouldn't get to see,” Nurse said. “And the second one is you've saved some leg power or other things for later, for guys (like Lowry) that would be burning some serious minutes and fuel right now, maybe get to rejuvenate their bodies, other parts of their bodies.”

Siakam led the way with eight points, including a pair of threes, in a first quarter that saw Toronto lead by eight before taking a 26-25 advantage into the second.

Hollis-Jefferson provided a spark off the bench with 13 points in the second quarter. A Williams three-pointer gave Charlotte a brief three-point lead, but an 18-6 run put the Raptors up by nine and they took a 60-56 lead into halftime.

Monday marked the beginning of a lengthy home stretch for Toronto - seven of nine games at Scotiabank Arena. The Raptors host the Orlando Magic on Wednesday.