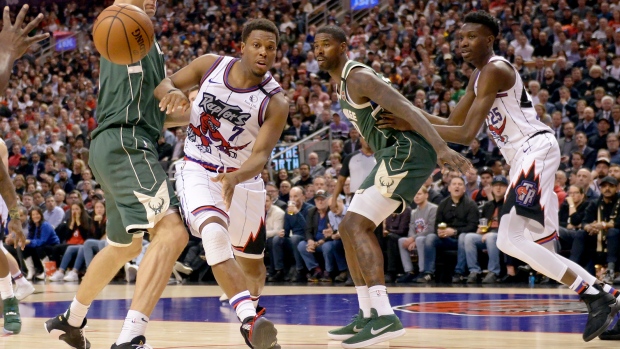 TORONTO - Khris Middleton scored 22 points as the Milwaukee Bucks rallied to defeat the Toronto Raptors 108-97 Tuesday and notch their 50th win of the season.

Giannis Antetokounmpo had 19 points and 19 rebounds and Eric Bledsoe added 17 points for Milwaukee, which was playing its third game in four nights.

Pacal Siakam had 22 points as the Raptors had six players in double figures. Toronto attempted a season-high 51 three-pointers, making 18.

Toronto (42-16) started well in the battle of Eastern Conference heavyweights but Milwaukee (50-8) outscored the Raptors 34-19 in the third to build a 13-point lead going into the fourth.

The Raptors reeled off seven straight points to open the final quarter. Milwaukee regrouped, ran the lead back up to 13 at 95-82 and didn't look back.

It marked the 82nd straight regular-season game that Milwaukee has scored 100 points, the second-longest streak in league history. Toronto made the Bucks, who have now won four straight, work for it.

The heavyweight matchup in the East drew Drake, hip-hop star and Raptors global ambassador. He arrived carrying two wrestling-style championship belts, which he handed over to the Raptors mascot perhaps as a reminder of the Raptors championship pedigree.

They remain the two best teams in the East. And both have been on a roll.

It took a while for the excellence to show Tuesday.

The teams combined to miss their first nine shots before Brook Lopez and Serge Ibaka exchanged three-pointers. Toronto made just two of its first 11 shots, nine of which were from distance. The Bucks weren't much better at three for 10 at the first timeout.

After trailing by as much as six, Toronto fought back to lead 27-25 after a first quarter that saw Antetokounmpo go down after being hit in the face in a collision with Terence Davis. The Raptors only shot 38.5 per cent but hit six three-pointers.

The Raptors pulled ahead 36-29 thanks to back-to-back Matt Thomas threes. The Iowa State rookie, getting minutes because of injuries to others, added another three-pointer in the quarter while showing some playmaking skills.

Playing some tough defence, the Raptors built the lead to 12. But Milwaukee closed out the half on an 11-1 run to cut the lead to 52-50.

The Bucks defence came up big in the third with the visitors leading 84-71 going into the fourth. Toronto shot seven-for-20 in the third quarter.

“It's always good to kind of re-gauge temperature and matchups and any differences that have happened,” Toronto coach Nick Nurse, speaking prior to Tuesday's game, said of playing the Bucks again. “It's been a long time since we've played, even though they are a familiar foe.”

The teams will play twice more during the regular season with back-to-back meetings April 1 and 3.

The Raptors came into the game on the back of a record 127-81 win Sunday over the visiting Indiana Pacers. The 46-point margin of victory was the biggest in franchise history, erasing a 44-point win over Atlanta in 2016.

The Raptors were without the injured Marc Gasol (hamstring), Norman Powell (finger) and Patrick McCaw (flu).

Lopez, who had been dealing with back soreness, played for Milwaukee.

This report by The Canadian Press was first published Feb. 25, 2020.