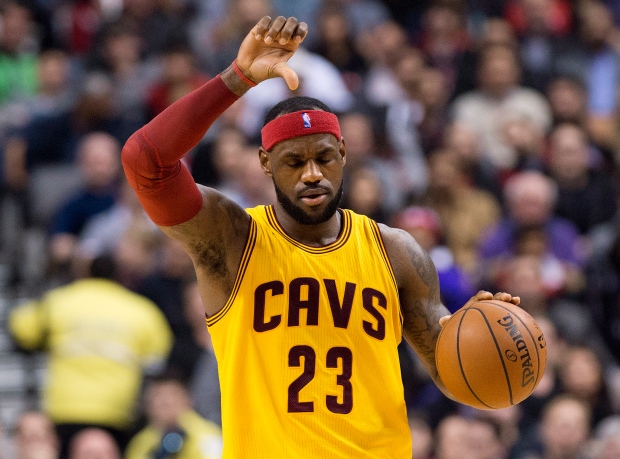 Cleveland Cavaliers forward LeBron James runs the ball up court against the Toronto Raptors during first half NBA basketball action in Toronto on Friday, Dec. 5, 2014. (The Canadian Press/Nathan Denette)

LeBron James scored 24 points to lift the Cavaliers to a 105-91 win over Toronto, less than two weeks after the Raptors beat the Cavs on their home court.

Amir Johnson had a season-high 27 points, and Kyle Lowry added 22 points and nine assists. But that wasn't enough to carry an East-leading Raptors team (15-5) that had only three players score in double figures -- James Johnson finished with 11.

Tristan Thompson of Brampton, Ont., finished with season highs for both points (21) and rebounds (14) for the Cavs (11-7), who stretched their winning streak to six games.

The Raptors had topped the Cavaliers 110-93 on Nov. 22, battling back from a 19-point first-quarter deficit. The result worked as a wakeup call for Cleveland, who promptly went on a five-game winning streak.

They made it six Friday night, leading from the opening whistle in front of a star-studded Air Canada Centre capacity crowd of 19,800 that included NBA legends Magic Johnson, Charles Barkley and Dikembe Mutombo, who gave his signature finger wag to the ACC crowd when shown on the Jumbotron.

The Raptors, who were 2-1 without DeRozan heading into Friday, could sorely have used the all-star, who's out indefinitely with a torn groin tendon. They trailed by as many as 14 points and went into the fourth down 76-64.

The Raptors managed to pull within six points a couple of times in the final 12 minutes, a dunk by Amir Johnson pulling them within 97-91 with 1:53 to play. But that was as close as they would get.

Johnson, Barkley, Mutombo, and Tracy McGrady were in Toronto as part of the Raptors' celebration of Nelson Mandela, who died a year ago to the day.

McGrady was honoured with a video tribute during a first-quarter timeout as part of the Raptors' 20th anniversary celebrations, and received a standing ovation from the ACC crowd.

McGrady said pre-game that he was looking forward to the video.

McGrady was the Raptors' ninth pick in the 1997 draft and played three seasons in Toronto.

"When I started playing at SkyDome, you do something exciting, it's like crickets in the building," McGrady said. "You just didn't get that great excitement, that warm reception that you need to get when you're playing in front of your home crowd. We built that my last year here when we made the playoffs, first team that made the playoffs in Raptors history.

"It's great to see the way it is today. I feel good knowing that what I went through and what I witnessed to what it is now. I'm proud to say that I was a Raptor."

The Cavaliers raced out to an early lead Friday, taking an eight-point advantage on a three-pointer by former Raptor Shawn Marion midway through the first quarter. The visitors took a 30-21 advantage into the second.

Back-to-back threes from James Jones gave the Cavaliers a 14-point lead less than two minutes into the second quarter. The Raptors chipped away at the deficit, and went into the dressing room trailing 51-44.

The Raptors carried their momentum into the third, and Lowry's three at midway through the quarter gave the Raptors a 58-57 lead. But the Cavs ended the quarter with a 19-6 run to go into the fourth quarter up by 12.

The Raptors host the Denver Nuggets on Monday.