Nick Nurse says Kawhi Leonard is tired, but 'he'll be ready' for Game 4 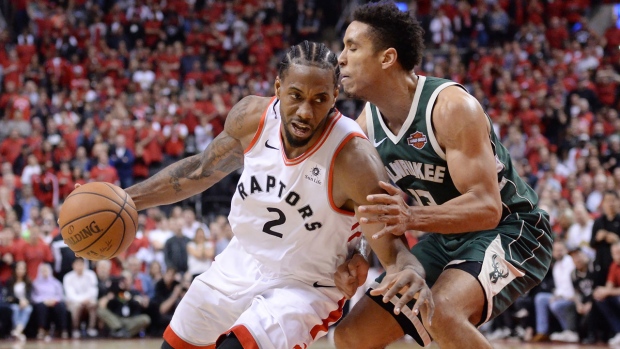 TORONTO -- Pascal Siakam carefully stepped down off the press conference podium on Monday, resting a hand on a Raptors staff member for support.

Kawhi Leonard wasn't made available to the media at all.

A day after they clawed out a 118-112 victory over Milwaukee in double overtime, the Toronto Raptors were feeling every one of the 58 hard-fought minutes.

Asked about the health of Leonard, who scored 36 points despite noticeably limping all night, Raptors coach Nick Nurse, still hoarse from the previous night, said: "I think the consensus today is he's tired, and he's got two days and will be ready to go. Those are kind of the words coming out of his mouth: Little tired, but he'll get his rest, got two days, and he'll be ready."

An injured Leonard, who pestered Giannis Antetokounmpo on the defensive end holding the Greek Freak to just 12 points, would be a massive blow for the Raptors. They trail the Bucks 2-1 in their best of seven Eastern Conference series. A loss in Tuesday's Game 4 in Toronto would mean a must-win Game 5 in Milwaukee.

"It's all about recovery right now, rest as much as your body needs it to rest," said Lowry, who sprained his left thumb in Game 7 of the conference semifinals. "No one at this time of the season is 100 per cent but you get to a point where you feel good and go into the next game. Your job is your job, adrenaline takes over, preparation takes over so you'll be ready to go for (Tuesday)."

Siakam, who wore a Toronto FC jersey to Monday's media availability -- the back read "Spicy Skills" -- had the opportunity to prevent overtime, but missed two free throws with 7.4 seconds left in regulation. The big man from Cameroon bristled when asked a couple of times about the misses.

"Ya'll keep talking about free throws man," said Siakam, who connected on two key free throws with 16 seconds left in the second overtime. "They just went in. The other ones didn't. I don't know what to tell you."

A prevailing thought at Monday's Bucks' availability with media was that Milwaukee's loss was more about the Bucks playing poorly, not the Raptors playing well.

"I know we can do better, so we'll watch film and get better," Bucks big man Nikola Mirotic said.

"That's how they're supposed to feel," Danny Green said. "We didn't play well either. We kind of survived that game with how poorly we shot the ball, but we haven't had a good shooting game as a team the whole series. I'm expecting we'll shoot better in Game 4."

Green couldn't shoot much worse. The 31-year-old, who's introduced pre-game as "the money man from three-point land!" shot 46 per cent from deep in the regular season. Sunday night, he was 1-for-9 from the field, and 1-for-6 from three.

Fred VanVleet, who TV broadcasters often call "Steady Freddy," has been anything but, his three-point shooting plummeting from 37.8 per cent in the regular season to 19.5 per cent this post-season. Sunday, he was a woeful 1-for-11 from the field, and made just one of his eight shots from deep.

Green's single three-pointer of the night was a key one, coming early in the first overtime period.

Green said some of his shots Sunday were off-balance. Some were rushed.

"But for the most part, I just missed," Green said. "You've got to keep taking those shots confidently. The next one -- I told Nick to stick with me. I had one in the chamber for him at some point. Luckily it came. He called my number. For a coach to do that, to have the confidence in me, to be 0-for-8 at the time and hit the next one . . . It felt good. Hopefully it starts a rhythm, builds for next game."

Lowry got more rest than he bargained for on Sunday after fouling out midway through the fourth quarter. The five-time all-star guard, who's been at his scrappy, hustling best in these playoffs, admitted his injured left thumb is affecting his playing.

"Obviously it's not helping because I'm fouling out. I've got to figure out how to use the other hand and be effective," he said. "You've got to be a little bit more cautious, it definitely is something you think about but it really doesn't matter. Honestly."

How's he able to shut it out?

"But, whatever, you gotta be mind over matter."

The Raptors have never come back to win a series after starting 0-2, although they've twice come back to tie a series. Last season, Cleveland stumbled to an 0-2 start in the conference finals against Boston before rallying to win the series.

Sunday's OT win was a massive lifeline for the Raptors. No NBA team has come back from being down 0-3 to win a series.

Game 5 is Thursday at Fiserv Forum.