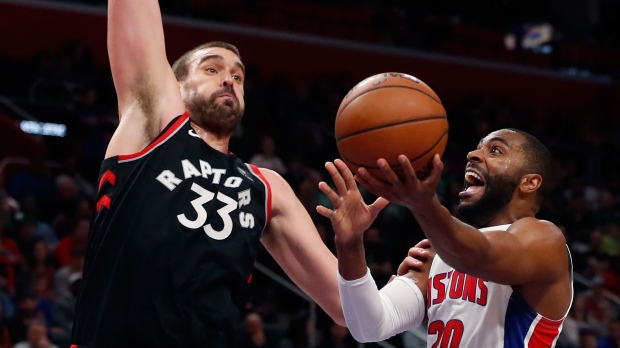 DETROIT -- Blake Griffin scored 25 points, Andre Drummond had 15 points and 17 rebounds and the Detroit Pistons beat the Toronto Raptors 110-107 on Sunday to complete a season sweep.

Reggie Jackson added 20 points to help the Pistons win for the 14th time in their last 18 games.

Kawhi Leonard had 33 points for Toronto, and Fred VanVleet added 17 points. The Raptors have lost four of seven games.

Drummond gave Detroit a 102-100 lead with two free throws with 1:25 to play. He then knocked the ball away from Leonard to set Wayne Ellington's layup that made it 104-100.

Leonard hit two free throws, but Griffin answered with a basket in the paint.

Griffin, though, missed two free throws with two seconds left and a three-point lead. The Pistons fouled Leonard, who missed both shots, with Drummond grabbing the rebound off the intentional second miss.

Raptors: Kyle Lowry missed his second straight game because of a sprained left ankle. VanVleet returned after missing 12 games with a thumb injury.

Pistons: Detroit hadn't swept a season series over the Raptors in 10 years. ... Pistons coach Dwane Casey is 7-0 in Pistons-Raptors games in the last two seasons, having coached Toronto to a four-game series sweep in 2017-18.

Pistons: At Cleveland on Monday night.