Raptors need more from secondary players like Green and Ibaka 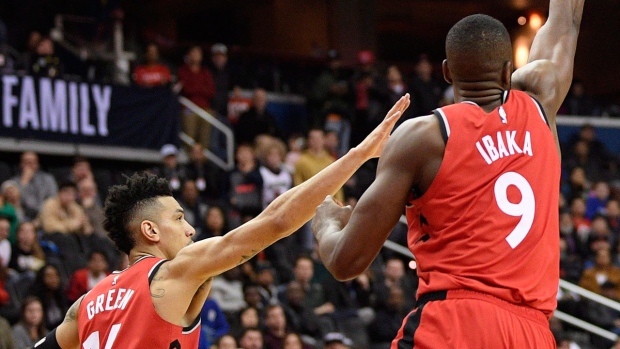 MILWAUKEE -- Danny Green arrived to speak with reporters on Thursday sporting a nasty black bruise on one knee.

The morning after a narrow loss to the Milwaukee Bucks in Game 1 of the NBA Eastern Conference final, the Toronto Raptors didn't practise, instead resting their bodies and studying video in the team's posh downtown hotel.

"Some banged up knees and some elbows. I did wear knee pads. It didn't help much," said Green.

The Raptors are regrouping after their 108-100 loss to Milwaukee that saw them lead for 37 minutes, but -- other than Kyle Lowry -- go stone cold in the fourth quarter.

Toronto is looking to get more from Green and the team's other secondary players after Lowry was the only Raptor to make a field goal in the final frame. Kawhi Leonard and Pascal Siakam have shouldered the offensive load for the Raptors in the post-season, and those two plus Lowry were the only players in double figures on Wednesday. Game 2 is here Friday.

"I think that's when we're at our best, when we've got everyone playing well offensively."

Green's three-point percentage has dropped from 45 in the regular season to 36 in the playoffs.

Toronto also needs a strong game from Serge Ibaka, who averaged 22.3 points on 49 per cent shooting against the Bucks in the regular season. The Raptors are 6-0 in the playoffs when Ibaka scores in double figures.

"I know that. I told myself (Wednesday) night after (the) loss that I have to play better for my team to have a chance to win," Ibaka said. "I have to do it. It's kind of pressure, but it's good pressure. Because that shows you how important I am for this team. It's a big challenge."

Three nights after scoring 17 points -- his best playoff performance this season -- in the Raptors' Game 7 second-round victory over Philadelphia, Ibaka had just four points and four rebounds in 17 minutes on Wednesday.

"Personally, I need to do a better job," said the 10-year NBA veteran.

"The energy. I know every time when I bring my energy on the court, my teammates can feed from that. I didn't bring that last night. I'm going to try to do better next game," Ibaka said. "The most important thing is the defensive mindset. I know every time when I get a couple rebounds and play with great action on the defensive end, that kind of opens up my offensive game."

Like Green, Ibaka is banged up, his hoodie pulled down to cover the bandage on his forehead. Ibaka had three stitches after a whack to the head from Leonard's elbow in Game 5 against Philly.

Lowry, who dislocated his left thumb on Sunday, was wearing his blue compression glove that looks more like an oven mitt. He dislocated his right ring finger earlier in the playoffs.

"I think the fingers helped (Lowry)," joked Green -- who wore a T-shirt of popular broadcaster Jack Armstrong wearing a crown, a nod to late rapper Biggie Smalls. "They popped out and he's the only one making shots right now. Hopefully other guys get a couple of dislocated fingers and make some shots."

While the Raptors are battered and bruised, Wednesday's fourth-quarter letdown might have been more about what's not visibly apparent -- the fatigue of playing three nights after their buzzer-beating Game 7 win.

Where does the fatigue show up in a game?

"You see it everywhere. You see it mentally, you see in on the court, shots are long, you make some small mental mistakes, give up back-door, you do this, you do that," Lowry said. "There's a lot of small mistakes but those are excuses."

Raptors coach Nick Nurse disagreed that fatigue was a big factor in his team's fourth-quarter collapse.

"It was a quick turnaround, you're on the road, travel . . . there's some stuff," Nurse said. "But I didn't see a whole lot of like, oh, we're just outmatched here because we don't have the physical wind or strength or whatever here. I just think that the game was right there in the balance with three minutes to go, and you need some breaks. You need to make some breaks. You need the ball to bounce your way a little bit, and we didn't get really (get) any."

The Raptors could see a more energized Bucks team in Game 2 at Fiserv Forum. Toronto caught a Milwaukee team that hadn't played in six days on their heels for the first half on Wednesday.

"Hopefully maybe we did knock off some rust as the game went on, and that hopefully can explain why we got better from the start to the end," Bucks coach Mike Budenholzer said.

The series shifts to Toronto for Games 3 and 4.