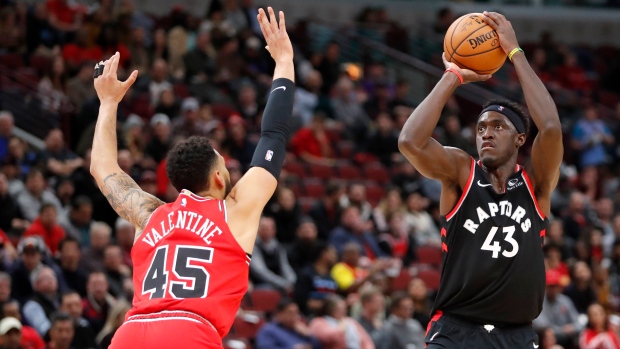 CHICAGO - Pascal Siakam scored 22 points, and the Toronto Raptors held on to beat the Chicago Bulls 93-92 on Monday night when Zach LaVine missed a runner in the closing seconds.

The defending NBA champions ended their first three-game skid since last November and beat Chicago for the 11th straight time. Norman Powell added 17 points for Toronto, including six in the fourth quarter.

LaVine scored 20 points for Chicago - all in the first half. Wendell Carter Jr. had 14 points for the Bulls, who made just 12 of 46 3-pointers on the way to their sixth loss in eight games.

Raptors guard Fred VanVleet missed the game because of a bruised right knee. Kyle Lowry scored 11 points in his third game after missing 11 in a row with a broken left thumb. The five-time All-Star made 1 of 8 3-pointers, and the Raptors hit 7 of 29 from beyond the arc.

Denzel Valentine led the way as Chicago opened the fourth quarter with a 14-6 run that turned a 71-all tie into an 85-77 lead. He nailed a jumper, buried two 3-pointers and fed Daniel Gafford for two alley-oop dunks. But the Raptors responded by scoring nine straight, going ahead on Lowry's two free throws with 3:52 remaining.

Toronto was leading 89-87 when Chicago's Lauri Markkanen nailed a 3 with 1:45 left. Powell scored for Toronto and Gafford hit a layup to give Chicago a 92-91 lead. Then Lowery scored on a drive with 51 seconds remaining.

The Bulls had a chance to win in the closing seconds after an out-of-bounds call got overturned by replay review. Tomas Satoransky inbounded to LaVine, who missed a runner along the left side. Gafford was unable to control the rebound, and the ball bounced around as time expired.

Raptors: Coach Nick Nurse said an MRI showed no structural damage on VanVleet. Averaging 18 points and seven assists, he left in the first half of a loss at Philadelphia on Sunday. ... Siakam scored 13 points in the first quarter.