Siakam scores 26 points and Raptors beat Memphis to clinch No. 2 seed in East 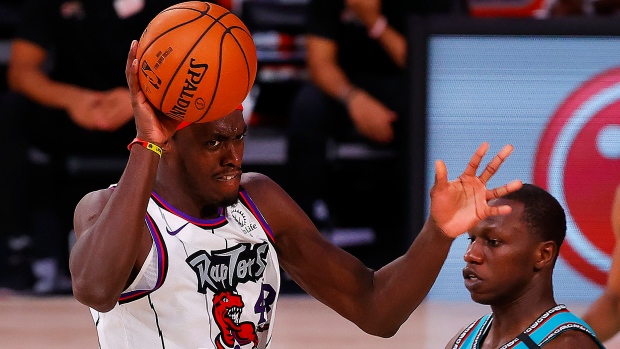 LAKE BUENA VISA, Fla. - After the NBA's four-month break due to COVID-19 - including a two-month stretch where he couldn't practise at all - Pascal Siakam is finally back.

Siakam scored 26 points including two big three-pointers down the stretch Sunday and the Toronto Raptors clinched the second seed in the Eastern Conference with a 108-99 victory over Memphis.

The 26-year-old who's been Toronto's first offensive option this season after losing Kawhi Leonard last summer to free agency, hadn't played up to his potential through the Raptors' first four games of the NBA's restart at Walt Disney World.

“Obviously a couple games there where you feel like you didn't play as well as you could have. . . I had to get a rhythm,” Siakam said. “Can't get down on yourself, especially when you've done this. I always feel like there's going to be periods where things aren't going to go the way that you want, but you've got to continue to play, continue to do what you do and figure it out. I've always been able to do that.”

For the fifth consecutive season the Raptors (50-19) have won at least 50 games, after going their first 20 seasons falling short of that mark. They improved to 4-1 in the NBA's restart at Walt Disney World.

Norman Powell had 16 points, while Kyle Lowry finished with 15 points but nine turnovers.

“It wasn't very pretty tonight, it was hard work, but it was good defence and timely plays when we needed them and it's a 'W' and it's a 4-1 record in the bubble, and a 50-win season,” coach Nick Nurse said. “I don't expect Kyle to have nine turnovers very often in a game. I think it's probably just a little bit of an anomaly.”

Fred VanVleet chipped in with 14 points, and Serge Ibaka added 12 points and 12 rebounds.

Marc Gasol had 10 points and six boards in his first game against Memphis since the Raptors acquired him in a trade for Jonas Valanciunas in February of 2019. The move paid off as Gasol, who'd spent parts of 11 seasons in Memphis, was a key part of Toronto's NBA championship run.

Siakam shot 9-for-16 and knocked down four three-pointers, and his emergence is good timing for Toronto with three games left before the playoffs. The 26-year-old said he'd been unable to practise for two months during the coronavirus lockdown, the longest break of his career.

“I just felt like my energy was better,” Siakam said.

“I thought Pascal had a nice night, obviously a little bit of uptick there,” Nurse added.

Dillon Brooks of Mississauga, Ont., had 25 points to top the Grizzlies (33-38), who are trying desperately to hang onto a playoff spot in the jam-packed Western Conference. Vancouver-born Brandon Clarke had 16 points, while Valanciunas, who played nearly seven seasons for Toronto, had zero points but 10 rebounds.

The Raptors led by as many as 17 points before some sloppy play down the stretch allowed the Grizzlies back into the game. OG Anunoby committed Toronto's 22nd turnover leading to a Brooks driving layup that was part of a Memphis 19-4 run, and when Allen floated in a jumper it was a five-point game with 4:10 left to play.

Brooks' jumper sliced the difference to just three before Siakam replied with a pair of three-pointers, putting Toronto back up by seven. VanVleet got his fingers on an Anthony Tolliver shot, Lowry finished with a reverse layup at the other end to put Toronto up by nine - and the game out of reach - with 55 seconds to play.

Both teams wore throwback uniforms, conjuring images of Naismith Cup competitions between the Raptors and the Vancouver Grizzlies before the team moved south in 2001.

The Raptors' seven-game win streak had ended two nights earlier with their worst loss of the season against Boston (122-100).

Sunday, the Grizzlies poured in 21 points on threes in the first quarter, while Lowry's three was Toronto's only basket from long distance in the frame. Memphis led 25-20 to start the second.

“I was doing a lot of cheerleading in the timeouts, I really was,” Nurse said of Toronto's early scoring troubles. “You acknowledge the fact that, man, it's just not going our way.”

The Raptors finally found their offensive rhythm in the second, connecting on seven three-pointers, and when Powell connected from beyond the arc with 2:11 left in the half, it capped a 28-11 Raptors run that had Toronto up by 11. Toronto took a 60-54 lead into the halftime break.

Gasol banked in a long three in the third quarter to put Toronto up by 15. A jump shot by Lowry sent the Raptors into the fourth up 88-71.

The Raptors face the league-leading Bucks on Monday in their first back-to-back games in the bubble.

But with the second spot locked up and no chance of catching Milwaukee for first, Nurse said he'll likely go deep into his bench over the final three games.

“My gut feeling today is we have played pretty heavy minutes,” he said. We have done what we kind of needed to do, I would say you will see a little bit of everything in the last three games as far as lots of guys playing, up and down the roster, some guys not playing, some guys playing limited minutes. I'd like to make a determination but as with everything in this bubble, in this scenario, it seems to be ever-changing for whatever reason.“

This report by The Canadian Press was first published Aug. 9, 2020.

Fred VanVleet, left, of the Toronto Raptors scores a basket and draws the foul as Grayson Allen, right, of the Memphis Grizzlies' defends during the first half of an NBA basketball game Sunday, Aug. 9, 2020, in Lake Buena Vista, Fla. (Kevin C. Cox/Pool Photo via AP)