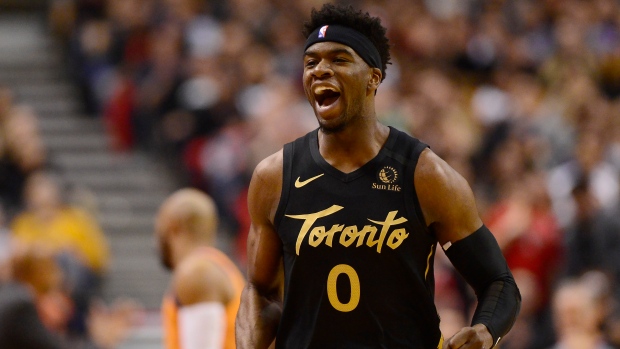 Toronto Raptors guard Terence Davis celebrates his three point basket against the Phoenix Suns during first half NBA basketball action in Toronto on Friday, Feb. 21, 2020. Davis has been named to the NBA's All-Rookie Second Team. THE CANADIAN PRESS/Frank Gunn

He averaged 7.5 points and 3.3 rebounds while being the only player to appear in all of his team's 72 games this season.

Davis was fifth among rookies in three-point percentage at nearly 39 per cent and eighth in field goal percentage (.456).

He is the team's 11th player in franchise history, and the first since Jonas Valanciunas, to be named to an All-Rookie team.

Davis joined the Raptors in July 2019 as an undrafted free agent after playing four years at the University of Ole Miss.

Canadian and New York Knick RJ Barrett received first-team and second-team votes, but missed out on both rosters.

This report by The Canadian Press was first published Sept. 15, 2020.