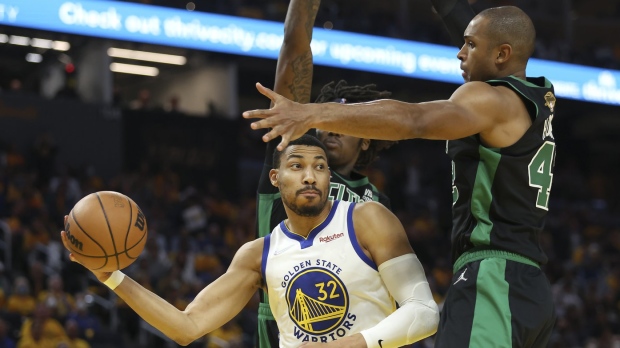 Porter was a key piece of the Golden State Warriors' championship squad this past season, averaging 5.4 points, 3.4 rebounds, 1.8 assists, and 19.5 minutes in 19 playoff games.

The deal was first reported last week, but the Raptors waited until Wednesday to introduce their newest signing to the media at the club's practice facility, the OVO Athletic Centre in Toronto.

The six-foot-eight forward wasted no time in appealing to Raptors fans. As he took the first question, he immediately began singing Toronto’s praises.

“I love the city," said Porter, who cited his experience playing the Raptors during his years with the Washington Wizards, as well as the fact that his wife is from Toronto. “It just made sense.”

The signing made a lot of sense for the Raptors as well.

Porter fits right into the on-court vision of the Raptors' front office, who have built a team with players of his length and skill in mind.

The NBA veteran also shot 37 per cent from three-point range for the Warriors in 2022, mainly in a bench role. That long-range touch, plus his dogged defence, made him a coveted piece for Toronto this off-season.

“We believe that Otto — who understands what it takes to be an NBA champion — is a great addition to the Raptors,"  general manager Bobby Webster said in a statement. “He’s a versatile defender and high-level shooter who fits well with our team both on and off the court.”

A native of St. Louis, Porter has averaged 10.6 points and 5.1 rebounds in his career.