With no VanVleet, Siakam narrowly misses triple-double in win over Charlotte 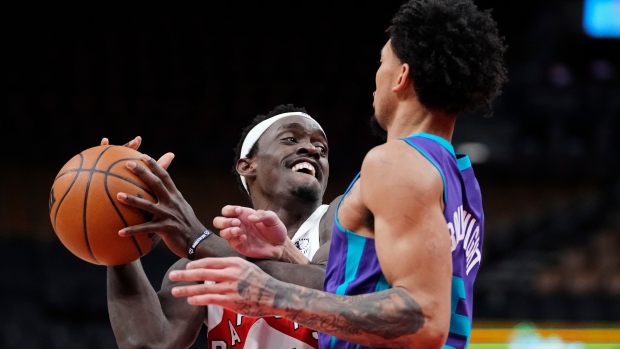 Instead, he saw opportunity.

Siakam was just shy of a triple-double in an excellent night at point guard, Toronto got off to a hot start, and the short-handed Raptors beat the Charlotte Hornets 125-113 on Tuesday.

“I've been preaching just trying to be an overall player and I feel like I can do that most nights, just being the best player out there and making my teammates better,” Siakam said.

With VanVleet sitting out with a sore right knee, Siakam had 24 points, matched his career high of 12 assists and grabbed nine rebounds.

“I'm getting more and more comfortable,” he said on playing at the point. “I think the more I do it the better I get, like anything that I do.

“I feel like if I put my mind to it, work hard at it, watch film and get the reps then I believe I can get better at it.”

Gary Trent Jr. poured in a season-high 32 points, Anunoby had 24 points, while Chris Boucher had 12 points. Malachi Flynn chipped in with 11, and rookie Dalano Banton had 10 for the Raptors (23-22), who were also missing Scottie Barnes, who was scratched less than an hour before tipoff with right wrist swelling.

The Raptors also lost Justin Champagnie early on. He and P.J. Washington were both ejected for a shoving match with 1:46 left in the first quarter.

LaMelo Ball had 25 points, while Miles Bridges had 22 to lead the Hornets (26-22), who arrived on the heels of three consecutive road wins.

“You could see right away that a lot of guys got completely different than the other night,” coach Nick Nurse said. “Just seemed like every time we were going shoot the other night it wasn't going to go in and everybody that stepped into one tonight, you though they were going to make them.”

Ball scored on a running dunk, swinging off the rim with one hand, the highlight of a Hornets' 10-0 run that pulled them to within three points in the third. But the Raptors weathered the storm, and when Trent Jr. went to the free-throw line for four shots -- he was fouled on a three-point attempt, and the Hornets were assessed a technical -- the Raptors were back up by 21, their largest lead of the game. Toronto went into the fourth up 105-86.

A dunk by Kelly Oubre Jr., sliced the difference to nine points early in the fourth, but that was as close as the visitors would come, and when Anunoby drilled a three-pointer with 3:21 to play, it put the Raptors back up by 20 points. Nurse then emptied his bench.

The Raptors are just 5-18 without VanVleet over the past two seasons.

Siakam initially had a triple-double earlier this month in Milwaukee, but the NBA took away two of his rebounds a couple of days later.

Being just one rebound shy Tuesday, Siakam was asked whether it felt like the universe was keeping him from a triple-double.

Trent Jr. and Siakam combined for 24 points in the first quarter, and a three-pointer from Banton capped a 19-3 Raptors run that put them up by 18 points late in the frame. Toronto shot 7-for-11 from three-point range in the quarter, and led 39-27 to start the second.

Seldom-used Flynn, who'd played the previous night with the team's G League affiliate Raptors 905, had nine points in the second and Toronto went into the halftime break up 76-61.

“It's difficult but that's our job, that's what we get paid to do so you got to just do it to the best of your ability,” Flynn said of staying ready. “It definitely helps (playing with the 905s the previous night), just to get up and down, run, get some cardio in, really, get some shots up.”

The Raptors face a couple of former star teammates in the next two games. They're in Chicago to take on DeMar DeRozan and the Bulls on Wednesday, then meet Kyle Lowry and the Heat in Miami on Sunday.

They play in Atlanta on Monday before returning home to host Miami then Chicago in a pair of games that would have big-ticket items for Toronto fans. The Raptors continue to play in an empty Scotiabank Arena, however, due to provincial COVID-19 restrictions. The government recently announced that a half-capacity crowd will be permitted as of Feb. 21, and a full crowd March 14.