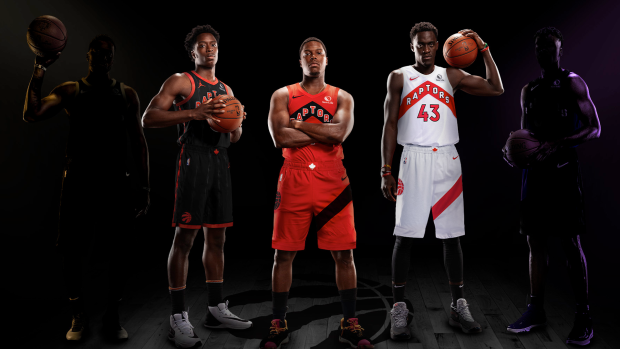 A month after their playoff run in the NBA bubble, the Toronto Raptors have unveiled what they’ll be sporting on the court this upcoming season.

Images of three of the five uniforms the team will be wearing throughout the 2020-2021 season were released on Thursday.

The designs feature the well-known “north” pointing chevron, as well as nods to the franchise’s origins, the team said in a news release.

“Uniforms do matter to players,” Raptors President Masai Ujiri said. “Our team made the choice to wear the Earned jerseys during the 2019 finals, for example.”

The team said the new Association Edition and Icon Edition uniforms are “reminiscent” of the red Earned Edition jerseys worn for much of the 2019 postseason, including the night they captured their first NBA Championship in franchise history.

The third new uniform, the Statement Edition jersey, “tips the hat to the Raptors’ original ‘dinosaur’ uniforms by running dark grey jagged pinstripes through the design.”

The new designs were made by Maple Leafs Sports and Entertainment’s in-house design team and Nike staff.

The new uniforms are made with recycled PET bottle and each one represents approximately 20 recycled bottles, the news release said.

The NBA and Nike got rid of traditional home and away uniforms prior to the 2017-2018 season and instead created four core uniforms for each team classified as Editions – Association, Icon, Statement and City. Home teams pick which uniform they will wear at all home games and then visiting teams choose a contrasting uniform within their collection.

An Earned Edition uniform was added prior to the 2018-2019 season as a fifth option for the 16 teams that made the playoffs the previous season.

Amid the COVID-19 pandemic, the NBA wrapped up their season in their Disney World bubble on Oct. 11 when the Los Angeles Lakers beat the Miami Heat 106-93 and took home the Larry O’Brien Championship Trophy.

At the end of September, NBA Commissioner Adam Silver said his predicts the next season will not begin until at least January.