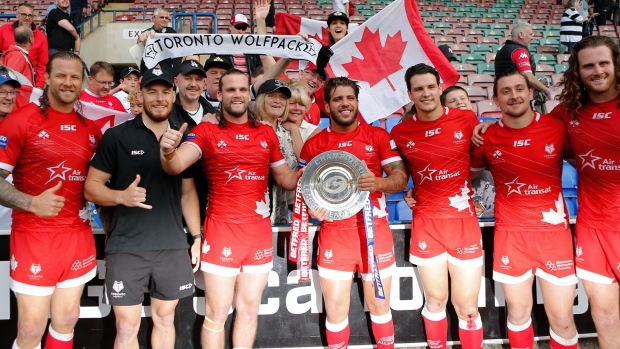 WIDNES, England - The Toronto Wolfpack clinched the regular-season title in the second-tier Betfred Championship on Sunday, running its rugby league win streak to 16 games with a hard-fought 24-19 comeback victory over the Widnes Vikings.

After Danny Craven's drop goal gave Widnes a 19-18 lead in the 73rd minute, the Vikings mishandled the ensuing kickoff. Toronto forward Anthony Mullally bulled his way over the line, fighting through several Widnes players to touch down under the post in the 74th.

Hakim Miloudi, the third Toronto kicker on the day, booted the conversion to give Toronto the lead.

That allowed the transatlantic Wolfpack to host the League Leaders' Shield after Sunday's game, splashing champagne on the field as Widnes fans booed.

Finishing first in the standings means Toronto has a shorter playoff path in its bid for promotion to the elite Super League. The top five teams in the Championship will meet in the post-season with one promotion place on the line.

As first-place team, Toronto gets a bye into the semifinal as well as home-field advantage.

The Wolfpack failed at the final promotion hurdle last season, when the promotion format was more complicated. Toronto went 20-2-1 in winning the Championship regular-season title, only to lose 4-2 to London Broncos in the Million Pound Game last October.

Widnes proved to be a motivated opponent Sunday, given that a loss in Toronto last season sealed its relegation. Sporting a stiff defence and some opportunistic offence, the Vikings led 12-8 at the half at Halton Stadium.

“The game came down to some big plays from both teams. So I'm really pleased with the win,” said Toronto coach Brian McDermott.

“I can't wait to lift the trophy in front of our fans as well,” he added. “But the bigger picture for us is the (promotion) Grand Final and that's what we're steering towards.”

Toronto (21-1-0) was without three key backs in Gareth O'Brien, Ricky Leutele and Matty Russell. O'Brien and Russell were injured while Leutele was rested. Forward Adam Sidlow is still recovering from injury.

Joe Mellor, a former Widnes player, started at fullback in place of O'Brien. Nick Rawsthorne and Greg Worthington also started in the backs.

Without O'Brien, the Wolfpack had kicking problems. Josh McCrone took over kicking duties after Rawsthorne missed two wide conversion and was good on one of two conversions.

Rawsthorne opened the scoring in the seventh minute, touching down in the corner after Mellor beat two defenders.

After a Widnes try was called back for a knock-on, the home side went ahead with a converted try in the 26th minute. Roby crossed the line, taking a pass from Joe Lyons whose kick on the last tackle bounced back to him off Stanley to keep the attack alive. An earlier kick on the game player had also bounced back from a Toronto player.

Craven added to the lead in the 30th after a fine run, cutting through the Toronto defence courtesy of two fine dummy passes.

Andy Ackers crossed the line later in the half for Toronto but fumbled the ball for a knock-on. Another handling error snuffed out a Wolfpack attack in the danger zone as the half neared an end.

But Stanley bulled his way over in the 39th minute to cut the deficit to 12-8.

Toronto tied it up in the 36th minute with a powerful run from Bodene Thompson after Jayden Hatton fumbled a Wolfpack kick near the Widnes try-line.

Toronto began to turn up the heat and Lussick put the Wolfpack ahead in the 52st minute, retrieving an errant pass at the Widnes goalpost for a converted try and 18-12 lead.

But a poor Toronto pass in the 58th minute was collected by Ince who outran Wolfpack chasers for an 80-metre try. Owens' conversion tied it at 18-18.

A successful 40-20 kick by Craven in the 65th minute moved Widnes deep into Toronto territory but the attack fizzled in a poor Roby pass at the corner.

Toronto moved right back up the field with Thompson and Gary Wheeler combining for major metres only to see Mellor spill the ball on the Widnes goal-line one play later.

McCrone tried a drop goal in the 70th minute but his low kick hit the woodwork. Craven succeed with his kick in the 73rd minute for a 19-18 lead.

The Wolfpack have lost just once this season, dropping a 46-16 decision to Toulouse Olympique on March 9. Toronto has beaten Toulouse twice since then.

Widnes came into the game in 11th place in the standings, thanks to a 12-point penalty for financial missteps.

In its inaugural 2017 season, Toronto won all 15 regular season games to top the third-tier League One and win promotion to the Championship after a 5-1-1 playoff run.

The promotion format has changed this year with just one Championship team earning promotion.

Last year, the top four teams in the Championship and bottom four in the Super League met up in the Super 8s Qualifiers. The top three in the playoff round-robin secured Super League status while No. 4 met No. 5 in the Million Pound Game.

Toronto, Salford, Leeds and Hull Kingston Rovers all finished with 5-2-0 records in the promotion table. But Salford (plus-143), Leeds (plus-79) and Hull KR (plus-35) finished ahead of Toronto (plus-18) on points difference to secure the three automatic promotion places.

Toronto finished fourth and London fifth, at 4-3-0, setting up the Million Pound Game.

The Wolfpack, who play next at Bradford on Aug. 4, will host the playoff semifinal on Sept. 21. A win and Toronto moves into the playoff final while a loss sends the Wofpack to a second semifinal in Toronto on Sept. 28.