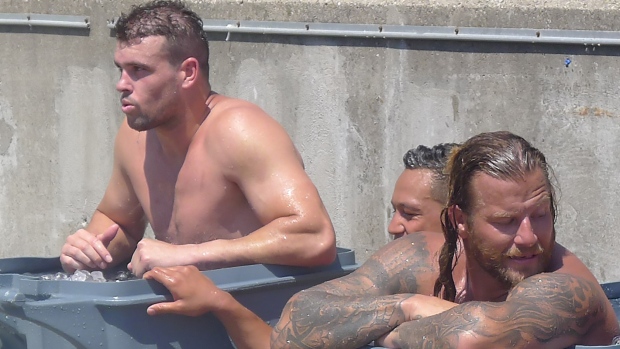 The two Australians are slated to meet Dec. 6 in Sydney. The main event of the boxing card pits Tim Tszyu against Jack Brubaker for the WBO Global and IBF Australasian super-welterweight titles.

The 30-year-old Lussick, who stands six foot four and weighs 251 pounds, is making his boxing debut. Hodges, 37, has fought twice already with stoppage wins over Rob Baron and Troy McMahon.

Hodges retired from rugby league at the end of the 2015 season following a distinguished 15-year career with the Brisbane Broncos and Sydney Roosters. He also played 13 times for Australia, 24 times for Queensland and made three appearances for the Indigenous All-Stars.

Lussick spent seven seasons in Australia's NRL from 2011 to 2017 with the Manly Sea Eagles and Parramatta Eels.

The Wolfpack are no strangers to the sweet science.

McDermott won his lone pro fight in 1995 before focusing on a rugby league career that saw him play for England and Great Britain. He returned to the ring in March 2016 to spar with former Commonwealth super-middleweight champion Henry Wharton for charity.

And new signing Sonny Bill Williams, who is leaving rugby union and the All Blacks to join the transatlantic Wolfpack, went 7-0-0 as a boxer between 2009 and '15, claiming the New Zealand and WBA international titles.

Williams told his introductory news conference last week in London that he has always included in his contracts a clause allowing him to box. And he still keeps an eye on the sport.

“I'm pretty interested in that fight,” Williams said in advance of the bout.

Williams has said he took up boxing initially because he needed money after buying out his NRL contract with the Bulldogs in 2008 to play rugby union in France. Williams said he was one million Australian dollars ($900,000) in debt at the time.