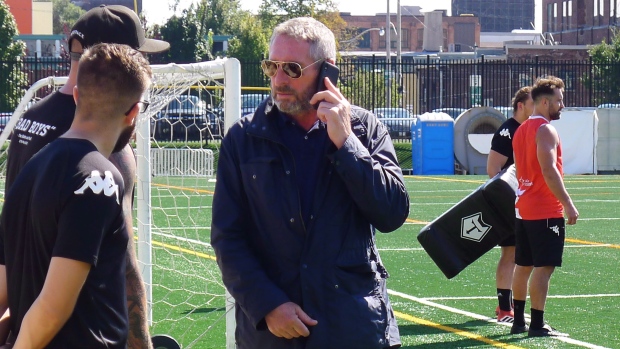 Toronto Wolfpack owner David Argyle is seen at a practice at Lamport Stadium in Toronto on September 12, 2018. Majority owner David Argyle plans to step away from the Toronto Wolfpack with the transatlantic rugby league team, currently in limbo, entertaining new ownership offers. Wolfpack president and CEO Bob Hunter said the Wolfpack are mulling over separate offers, one from North America and the other from the United Kingdom. THE CANADIAN PRESS/Neil Davidson

The Toronto Wolfpack, currently a rugby league team in limbo, are on the brink. Majority owner David Argyle, who estimates his ownership group poured $30 million into the team with little or no return, has said he is stepping aside.

A new owner is needed. Preferably one whose vision of the future includes the Super League franchise in Toronto.

“It is challenging on a day-to-day basis, but I do see - with new ownership - a light at the end of the tunnel,” said Hunter, the former MLSE executive tasked with helping clean up the mess. “And I still believe this thing has legs in Toronto.

“It's a matter of putting together the proper finances to be able to ride the storm out. And that's what it is right now. And no criticism of David because he's done it for three years. But you can't own a professional sport team and not be able to financially support it.”

Hunter says the club is in talks with two potential buyers, one from North America and the other from the United Kingdom.

“There is no way that David can cope with this,” he continued. “Because I know the state of our financials and without an influx of new financial resources, it would look awfully tired moving forward. And David's been clear. It's not coming from him.

“So if we don't get a new owner, it would be very challenging to keep the club going.”

Two sources, not authorized to speak publicly on the club's possible sale, confirmed that the U.K. potential buyer is Newcastle Rugby Limited, which owns rugby union's Newcastle Falcons and rugby league's Newcastle Thunder. The Thunder, who play in the third-tier League 1, are coached by former Wolfpack assistant Simon Finnigan.

The other interested party, according to the sources, is the group trying to bring rugby league to New York.

“We're pushing for an ownership resolution that keeps the team in Toronto, No. 1, for sure,” said Hunter, who believes Super League shares that preference.

The fate of the Wolfpack has been up in the air since July 20 when Argyle announced the team could not afford to take part in the remainder of the Super League season given the prospect of no games in Toronto - and essentially no revenue.

The Wolfpack were a labour of love for Argyle, a Toronto-based Australian entrepreneur specializing in mining and natural resources in emerging markets. But with borders closed and a sports landscape virtually paralysed by the pandemic, the team's transatlantic status proved to be a burden rather than a boon.

The Super League, which resumed play last Sunday with just 11 teams, has expunged Toronto's record from the standings and withdrawn the franchise's participation agreement, meaning it would have to re-apply to get back in the league.

The Wolfpack have said they want to field a team in 2021. But even if new ownership is found, it will be up to rugby league authorities whether they should be allowed back in, as well as in which division.

In the meantime, the club is in the red. Hunter confirmed that the team missed the monthly payroll on July 1 and Aug. 1.

Star centre Ricky Leutele, an Australian-born Samoan international who has since signed a short-term deal with the NRL's Melbourne Storm, complained of getting an eviction notice in England when the Wolfpack stopped paying the rent.

All seven of the Wolfpack's international players, who had their housing providing by the team, were in the same boat, said Hunter, who hopes to resolve the issue this week.

England's Daily Mirror reported that the GMB union, representing the Wolfpack players, plans to take the club to court over the unpaid wages. Hunter said while he had heard that, the club has not been served with a lawsuit.

Argyle has personally guaranteed that the missing payroll for players and staff will be taken care of.

“He still intends to pay them. I just know that right now he does not have those resources,” said Hunter. “He is seeking them out and he understands that he has an obligation. There is a personal guarantee in writing to the RFL (Rugby Football League) on all the team's salaries and David has signed that personal guarantee.

“Again I just don't know at this point in time when that's going to happen.”

Hunter has said that while a potential new owner will be asked to help make up the payroll shortfall, bankruptcy protection is an option.

The Wolfpack have said they will permit players to go out on loan to other clubs for the rest of the season, allowing them to strike their own deals.

The players are currently making, on average, about 55 per cent of their contracted 2020 salary - with the reduction due to the pandemic. If they sign with another club, the plan would be for them to continue to get that amount from Toronto, with their new club topping it up to some degree.

Some star players took a deeper cut, with the proviso that the extra amount would be deferred and would be repaid in 2021.

The RFL has moved to allow teams to sign any of the Wolfpack's import players without affecting the number of import players the team already has under contract.

Leutele already has his new team. Williams and his family are currently in quarantine in Sydney with the former All Black expected to join the NRL's Sydney Roosters when he emerges. Prop Brad Singleton has been linked to the Wigan Warriors.

Toronto started life in League 1 in 2017, winning promotion to the second-tier Championship in its first season. It took two more years to make it to the elite Super-League.

The Wolfpack were on top of the world last October when they won promotion to the top tier with a 24-6 victory over Featherstone Rovers in the so-called Million Pound Game.

The game drew an announced sellout crowd of 9,974 at Lamport Stadium - a Wolfpack and Championship record. The previous record of 9,562 was set during Toronto's April home opener against Swinton.

The club then made worldwide headlines by signing Williams as Argyle looked to grow the sport in North America while holding out hopes of showcasing his team around the globe, either on TV or in select away matches elsewhere in Europe.

But the money ran out. Whether Argyle's dream goes with it, remains to be seen.