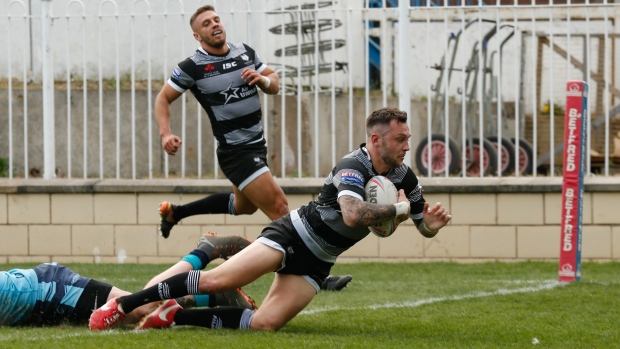 Dixon's sixth try of the season, in the 75th minute, saved the day for Toronto (10-1-0), which has a four-point lead atop the second-tier Championship table. Russell then scored his third of the day in the corner in the 80th minute before leaving the field favouring his shoulder.

Trailing 13-12, Dane Chisholm booted a long-range penalty in the 66th minute to put Featherstone ahead 14-12. Featherstone came close to increasing its lead but Jack Broadbent, in the arms of Toronto tackler Jon Wilkin, lost the ball in the act of touching it down with 10 minutes remaining.

“It was an 80-minute performance from both squads but it was good to get away with the win at the end,” said Toronto centre Rickey Leutele. “I think it was a well-deserved win too.”

After 11 consecutive road games, the Wolfpack host Swinton Lions on Sunday at Lamport Stadium. It's the first of 10 home games in the back half of the schedule.

It was a short turnaround for both teams on a busy Easter weekend schedule.

On Friday, Toronto rallied from a 12-0 deficit to thump Barrow Raiders 52-26 thanks to three-try performances from both Blake Wallace and Gareth O'Brien for its fourth straight win. Featherstone (5-0-5) defeated York Knights 42-12 for its third consecutive win.

O'Brien also scored a try for Toronto, which led Featherstone 13-6 at the half. Wallace kicked one conversion and Josh McCrone added a drop goal.

Featherstone got a spirited performance from former Wolfpack forward Jack Bussey, who parted ways with Toronto after a suspension for biting last season.

Featherstone was the first to cross the line but Broadbent put a foot into touch just before touching down in the corner. Toronto's Bob Beswick made it over in the seventh minute but was held up by Featherstone defenders.

O'Brien opened the scoring in the 14th minute, capping a sweeping attack with a dummy before touching down. He fell awkwardly, clutching his left shoulder in pain, but continued playing after some treatment.

Alex Sutcliffe denied another Wolfpack try, cutting down O'Brien near the goal-line and forcing a turnover from the Toronto fullback. Featherstone was unable to take advantage with Sutcliffe mishandling the ball deep in the Toronto end.

Featherstone cut the lead to 8-6 in the 26th minute when Makatoa, a Cook Islands international, finished off a hard-charging Rovers attack with Bussey playing his part. Toronto answered in the 30th minute with Leutele setting up Russell in the corner for his second try and a 12-6 lead.

O'Brien was sin-binned in the 33rd minute for taking down Chisholm with a high tackle on a line break. Broadbent seemed destined to score in the corner soon after for Rovers, but lost the handle on the ball at the last second.

McCrone added a drop goal just before the end of the half.

Carey scored a highlight-reel try in the 43rd minute, keeping his balance just inches from the dead ball line to touch down a kick from Chisholm, who set up the play with a fine line break. That cut the lead to 13-12.

A try by Toronto winger Adam Higson was waived off in the 50th minute for a grounding error.

The teams had split their meetings last season with Featherstone winning 30-12 on the road and losing 24-16 at home.