Tuchel may be punished for referee comments after Conte feud 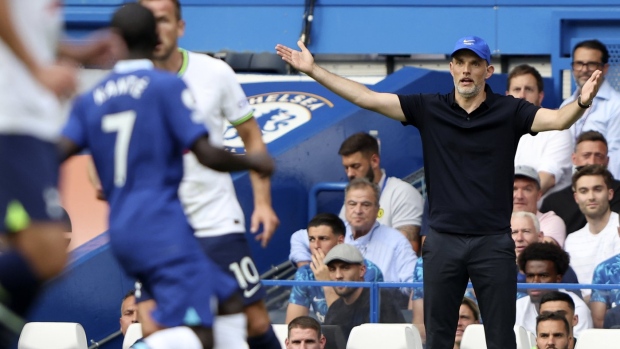 LONDON (AP) — Chelsea manager Thomas Tuchel can expect to receive more than just a suspension in the fallout from the latest feisty match with Tottenham in the Premier League.

Tuchel is set to find himself in trouble for some incendiary comments about the referee, too.

Most of the post-match focus after Sunday’s 2-2 draw at Stamford Bridge was on the angry exchanges between Tuchel and Tottenham manager Antonio Conte during and after the game. Both coaches were shown red cards after squaring up to each other following their aggressive hand shake after the final whistle, and are likely to be banned from the dugout for their teams’ next game.

However, Tuchel also turned on referee Anthony Taylor in his post-match news conference, saying “maybe it would be better” if Taylor no longer officiated games involving Chelsea.

Asked about a view held by some fans that Taylor has a history of decisions against Chelsea, Tuchel said: “I don’t think just some of the fans think that. I can assure you the whole dressing room of us, every single person, thinks that.”

The Football Association will look into those comments and even Tuchel raised the likelihood of being “punished” for speaking out against Taylor.

Tuchel was unhappy that an apparent foul by Tottenham’s Rodrigo Bentancur on Chelsea’s Kai Havertz was missed by the officials prior to Tottenham’s equalizer. He also was surprised Tottenham defender Cristian Romero wasn’t penalized for pulling the hair of Chelsea’s Marc Cucurella at the corner before Harry Kane’s second Tottenham equalizer in the sixth minute of stoppage time.

Tuchel described it as a “huge, huge misinterpretation of situations.”

Meanwhile, Conte used his Instagram account to continue his feud with Tuchel that exploded after Tottenham made it 1-1, with Conte celebrating Pierre-Emile Højbjerg’s 68th-minute goal by going up to Tuchel and barging into his chest, sparking a melee among the coaching staff and substitutes.

Then, after the final whistle, as Tuchel and Conte shook hands on the field, Tuchel seemed to not let go of his grip and intimated that Conte look him in the eyes. They squared up again and shouted in each others’ faces.

In his post on his Instagram account, Conte included a photo of Tuchel running past him to celebrate the goal from Reece James that put Chelsea 2-1 ahead, and wrote alongside it: “Lucky I didn’t see you... making you trip over would have been well deserved...” and followed that with three cry-laughing emojis.