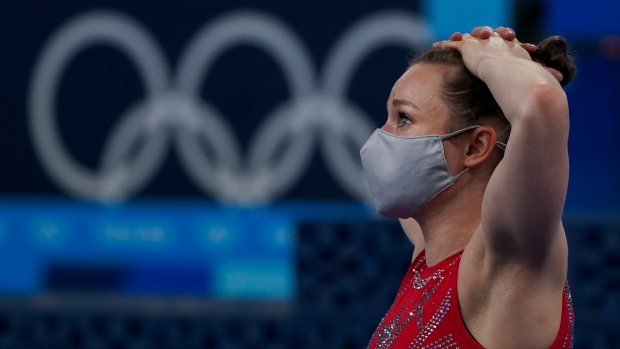 Canada's Rosie MacLennan tears up as she watches the results following a fourth place finish in the women's trampoline gymnastics final during the Tokyo Summer Olympic Games, in Tokyo, Friday, July 30, 2021. THE CANADIAN PRESS/Nathan Denette

TOKYO -- Forced to use a walking boot and crutches after a "bad landing" in a training session nine weeks ago, Rosie MacLennan wasn't sure she'd even be able to make it to Tokyo.

The two-time defending Olympic champion not only returned to the Summer Games, she nearly made it back on the podium.

Despite limited pre-Games training and a left ankle that wasn't quite 100 per cent, MacLennan reached the women's trampoline final Friday but her goal of a three-peat was dashed with a fourth-place showing at the Ariake Gymnastics Centre.

"The fact that I was able to get here and compete, represent Canada in the sport that I love and do as well as I did, I know I have to be happy with that," MacLennan said.

After the competition, MacLennan revealed that she suffered multiple torn ligaments, a partially torn ligament and several bone bruises after the mishap at her training base near her hometown of Toronto.

Consistent physiotherapy sessions helped her get to the point where she could eventually try out a routine. She completed a series of skills for the first time post-injury just two days before the team left for training camp in Japan.

"I was trying to do the best that I could with what I had," said MacLennan, who turns 33 next month.

Coach Dave Ross admitted that MacLennan's participation in the Games was "looking pretty grim" at one point. They worked together to cut down on the volume of training, focusing on quality instead of intensity with their preparation.

MacLennan finished fourth in the qualification round to make the eight-woman cut for the final. However, her difficulty and execution marks were slightly below the medallists, preventing a third straight Olympic podium appearance.

Trampolinists are scored on difficulty, execution, time of flight and horizontal displacement. Athletes try to find a balance of difficulty and execution without sacrificing height and mat placement.

MacLennan felt she "travelled" a bit too much away from the centre of the trampoline during her final routine and it proved costly. When Liu closed the proceedings with a second-place finish, it bumped MacLennan from third to fourth.

MacLennan showed no signs that she was nursing a tender ankle.

By not revealing her injury details before the competition - Ross would reference figure skater Elvis Stojko's silence about his groin injury at the '98 Nagano Games - it was hoped that she wouldn't be prematurely dismissed as a medal threat.

"If the judges think she's an injured athlete, they won't see her as a potential winner," Ross said. "So we didn't want to tell people that she had an injury. She looked as good as if she wasn't hurt, she was just jumping a little bit lower.

"So that three-tenths lower is the difference between fourth and third right there, without even the other mistakes."

At one point, MacLennan had considered trying a routine with three triple-front somersaults, which would have been a first in competition. While she did include two triple-fronts in the final, the ankle issue had forced a rethink of her overall strategy.

Ross had MacLennan use what he called a "bizarre, new strategy" of doing six back tricks - going forward-back-back on two occasions - so that she could jump higher and score more than a traditional routine.

"She could have done a routine today with just a little less travel and it would have been enough to get a medal for sure," he said.

MacLennan, who finished seventh at the Beijing Olympics in 2008 and won a world title in 2013, also had her pre-Games training in 2016 hampered due to injuries.

She still managed to deliver a strong final routine of twists, flips and jumps to take gold in Rio. But MacLennan simply couldn't follow the same formula this time around.

"The preparation wasn't what I was hoping for," she said. "I think given the circumstances and with all the support of the people around me I was able to do something (today) and make the final.

"If you had told me that six weeks ago, I would have been stoked. So it's bittersweet."

This report by The Canadian Press was first published July 30, 2021.