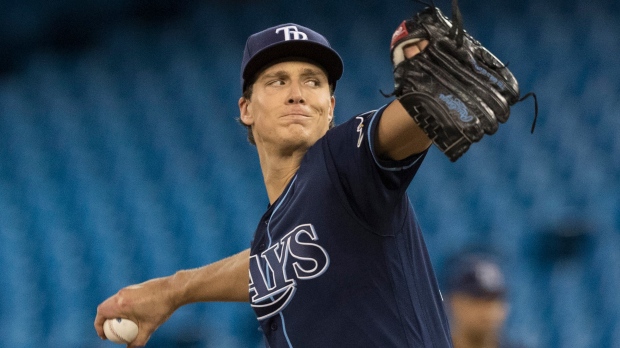 TORONTO - An excellent outing from starter Tyler Glasnow and a two-run homer from Tommy Pham helped the Tampa Bay Rays clinch an American League wild-card berth with a 6-2 win against the Toronto Blue Jays on Friday.

The Rays victory, coupled with the Cleveland Indians 8-2 loss to the Washington Nationals, pushed Tampa Bay into the playoffs for the first time since 2013.

The Rays sprinted to a celebration behind the mound after Toronto catcher Reese McGuire grounded out to first base to end the game.

Before being named manager of the Blue Jays 11 months ago, Charlie Montoyo had worked in the Rays organization for 22 seasons.

Glasnow pitched a strong 4 1/3 innings. He didn't allow a hit, struck out four and walked two. The righty retired the final eight batters he faced in his 66-pitch outing.

Pham put the Rays in front 2-0 with his 21st homer. Joey Wendle led off the third inning with a single to right field. Pham then crushed the first pitch from Toronto starter T.J. Zeuch over the Blue Jays bullpen in left field.

The Rays increased their lead to 3-0 in the fourth inning. Nate Lowe led off with a walk and advanced to second on Avisail Garcia's slow ground-ball out to third base. Willy Adames cashed in Lowe with a single to centre field.

Zeuch lasted five innings and was responsible for three runs and four hits.

The Blue Jays didn't get a hit until Glasnow left the game. Outfielder Teoscar Hernandez greeted Tampa Bay reliever Colin Poche with a one-out double down the left-field line. But Hernandez was stranded on second base after Richard Urena flew out to centre and Derek Fisher fouled out in front of his team's dugout.

The Rays had the bases loaded with one out in the seventh inning. But Toronto reliever Ryan Tepera coaxed Pham into a double play after a hard-hit grounder to Toronto third baseman Vladimir Guerrero Jr.

The Blue Jays finally busted out for a couple of runs in the seventh inning thanks to Hernandez's two-run shot to right field with McGuire aboard. The homer was Hernandez's 24th in 2019.

The Rays, however, regained their three-run advantage in the eighth inning. A single and double from Travis d'Arnaud and Lowe, respectively, put runners on second and third with one out. Garcia singled home pinch-runner Johnny Davis. Lowe scored after Adames whiffed, but he reached first base after the ball eluded McGuire. The Blue Jays catcher was charged with a passed ball and throwing error on the play.

Austin Meadows added another run with a solo blast, his 33rd, to lead off the ninth.