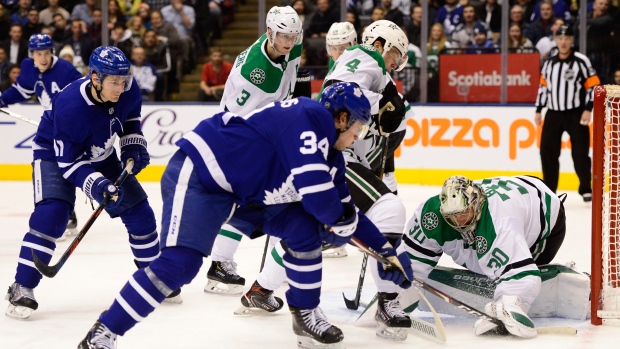 Toronto Maple Leafs centre Auston Matthews (34) tries to get to the puck as Dallas Stars goaltender Ben Bishop (30) gets his glove on it during second period NHL hockey action in Toronto, Thursday, Feb. 13, 2020. THE CANADIAN PRESS/Frank Gunn

Denis Gurianov and Radek Faksa also scored for Dallas (33-19-5), which won its third game in a row.

Auston Matthews, with his 41st goal of the season to move back into a tie for the NHL lead, and Zach Hyman replied for Toronto (30-20-8). Frederik Andersen, in his return after missing four games with a neck injury, stopped 16 shots as the Leafs dropped to 2-3-1 over their last six.

Dallas led 2-1 through 40 minutes and went ahead by two after Leafs captain John Tavares went off for tripping early in the third. Making his NHL debut with veteran forwards Alexander Radulov and Joe Pavelski out injured, Stars rookie Jason Robertson's initial shot popped over to Seguin, who buried his 12th of the season at 1:19 of the third in the arena where he used to watch games as a kid.

Andersen stopped Gurianov on a breakaway midway through the third to keep Toronto within striking distance before Bishop robbed William Nylander at the other end.

The Leafs pulled their goalie with three minutes to go and Hyman made it 3-2 with his 17th on a rebound with 1:19 left on the clock.

Toronto continued to press, but Bishop and the Stars held on.

After giving up a goal on the game's first shot in an opening period controlled by Dallas, the Leafs fell behind 2-0 just 24 seconds after the intermission on the initial shot of the second when Faksa moved in alone on Andersen and slid his 10th through the five-hole.

Andersen, who was hurt in the first period of a 5-3 loss to Florida on Feb. 3, held the fort on back-to-back Dallas power plays before Toronto got a spark when bruising forward Kyle Clifford - acquired along with backup goalie Jack Campbell from the Los Angeles Kings last week - dropped the gloves with hulking Dallas defenceman Jamie Oleksiak.

The fight was the fourth of the season for the Leafs, and the fourth overall for Clifford, who took his six-foot-seven, 255-pound opponent to the ice, much to the delight of the Scotiabank Arena crowd.

With winger Andreas Johnsson done for the night after hurting his right knee in the first, Leafs head coach Sheldon Keefe was forced to mix his lines and break up Matthews, Nylander and Mitch Marner - a super trio that accounts for nearly US$29.5 million in average annual value on the salary cap, but failed to record a point in four periods of action.

The Clifford-Oleksiak tilt seemed to give Toronto a jolt before Matthews scored his 41st to tie Boston's David Pastrnak at 11:21 on the power play when he wheeled off the boards and snapped a shot past Bishop's blocker to make it 2-1.

The Leafs, who beat the Stars 5-3 in Dallas on Jan. 29, started the night third in the Atlantic Division, two points up on Florida, which has a game in hand and was in action against Philadelphia.

Third in the Central Division, the Stars jumped out to a 1-0 lead at 1:20 in when Gurianov took advantage of a turnover and fooled Andersen through the pads on an effort that just squeaked over the goal line for his 17th.

Toronto didn't force a save out of Bishop until after the 10-minute mark against the bigger, more physical Stars as the home side, which was outshot 6-3 and outhit 15-3, failed to generate much of anything in the opening 20 minutes.

Notes: Stars centre Andrew Cogliano, a product of the Toronto suburb of Woodbridge, played the 1,000th game of his NHL career. ... Dallas defenceman Roman Polak, who played parts of four seasons in Toronto, suited up for his 800th game. ... Robertson is the older brother of Leafs prospect Nick Robertson. ... The Leafs are at Ottawa on Saturday and Buffalo on Sunday. ... The Stars visit Montreal on Saturday and Ottawa the following night.