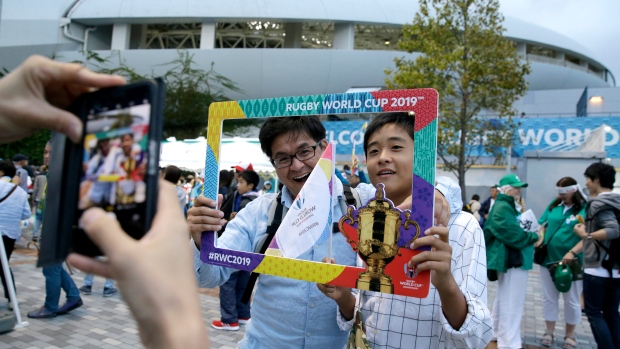 Fans pose for a photo as they arrive at the stadium ahead of the Rugby World Cup Pool A game at Fukuoka Hakatanomori Stadium between Ireland and Samoa, in Fukuoka, Japan, Saturday, Oct. 12, 2019. (AP Photo/Aaron Favila)

KAMAISHI, Japan - Canada will leave the Rugby World Cup winless for the second straight tournament, with the weather tying its hands this time.

Tournament organizers decided to cancel Canada's final Pool B game against Namibia because of Typhoon Hagibis. The game was due to kick off at 12:15 p.m. local time Sunday at the Kamaishi Recovery Memorial Stadium (late Saturday night in Canada).

“I think it's still sinking in,” a disappointed Canada coach Kingsley Jones said. “It's a unique situation at test (match) level. It doesn't happen very often, if ever. But it's happened.”

“It is what it is. We accept the reasons as well,” he added.

World Rugby issued a statement saying an evacuation order remained in place in the Kamaishi area and there had been landslides and flooding in the vicinity of the stadium.

“The safety of all involved in Rugby World Cup 2019 is our primary consideration and fans are advised not to travel to Kamaishi or the venue, which will be closed,” World Rugby said.

The Canadian team, which is slated to leave for home Monday, was restricted to its hotel early Sunday.

Two of Saturday's three scheduled games - New Zealand against Italy and England against France - were cancelled well before the destructive typhoon made landfall. Organizers will assess conditions in Yokohama before making a decision on Japan's last Pool A game against Scotland later Sunday.

Cancelled matches are logged as 0-0 ties, and teams get two competition points each.

Canada, ranked 22nd in the world, had targeted the game against No. 23 Namibia as its best chance at a victory.

Both teams had previously lost to No. 1 New Zealand, No. 5 South Africa and No. 12 Italy. While the teams were tied at two points apiece, Namibia finished fourth in the pool ahead of Canada on points difference (minus-141 for Namibia and minus-163 for Canada).

“We completely understand the decision given the conditions we're facing here,” Canadian media manager Gareth Rees said in a video showing the wind-whipped waves on Kamaishi.

World Rugby said the decision was forced upon it.

“Following extensive discussions with World Rugby, Kamaishi City and Iwate Prefecture, during which we considered every possibility to make this game happen, in the end we had no option but to cancel the match to ensure the safety of the fans, team, volunteers, and all others involved,” organizing committee chief executive Akira Shimazu said.

“It was both a difficult and emotional decision to make, however I feel it's the right decision and firmly believe both domestic and foreign fans will understand the decision was made to ensure safety.”

The Canadian men, who went 0-4-0 at the 2015 tournament, have not won a game at the world Cup since a 25-20 victory over Tonga at the 2011 competition. They have lost their last eight tournament matches, outscored 387-87 in the process.

The Japan Meteorological Agency had forecast the typhoon to be the worst to hit Japan in six decades. It brought heavy rainfall in wide areas of Japan all day ahead of its landfall early Saturday evening, and continued to batter parts of the main island with heavy winds and torrents of rain overnight.

An earthquake with a preliminary magnitude of 5.7 shook the areas drenched by the rainfall, shortly before the typhoon made landfall in Shizuoka prefecture.

With files from The Associated Press

This report by The Canadian Press was first published Oct. 12, 2019.