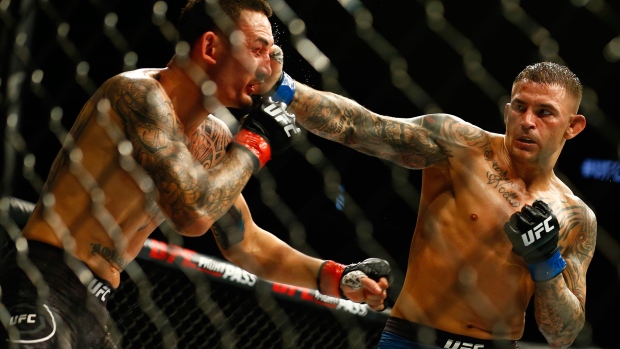 ATLANTA - Dustin Poirier bloodied Max Holloway and won a unanimous decision for the UFC interim lightweight title on Saturday night, denying Holloway his chance to become only the fourth fighter to hold two belts at the same time.

Holloway, the UFC featherweight champion, moved up to the 155-pound class for the first time, attempting to gain the second belt. He also was trying to avenge his loss to Poirier in his first UFC fight in 2012.

Holloway had Poirier in trouble in the third round but couldn't overcome Poirier's relentless barrage of punches.

Holloway was bleeding heavily by the fourth round. There was so much blood on his face in the fifth and final round that it appeared he had difficulty seeing at times as he wiped his eyes.

“This feels great,” Poirier said. “I feel like I'm in a dream right now.”

Holloway (20-4) had his streak of 17 consecutive wins end. He hasn't ruled out a return to the featherweight class.

“I'm not going to take nothing from Dustin,” Holloway said in the octagon, looking at Poirier. “You beat a world champ and you're a world champ.”

In the other headline fight of UFC 236, Israel Adesanya earned the interim middleweight title with his domination of Kelvin Gastelum in the fifth round.

Adesanya (17-0) wore the gold championship belt immediately after the unanimous decision was announced.

Gastelum (15-4) appeared to have Adesanya in trouble at times. Adesanya's corner treated a cut under his right eye after the fourth round, but the rising star from New Zealand had a decisive finish in the fifth, when Gastelum was bloodied for the first time and knocked down three times.

Gastelum was obviously groggy after being floored for the second time, and he quickly went down again. Just when it appeared the fight might be stopped, Gastelum was saved by the final bell.

“I was ready for a five-round war, but it is not what I expected,” Adesanya said. “... I will say Kelvin did well to land the jab. That was unexpected and I was surprised to let him get that jab.”

Poirier's possible reward for his win is a chance to face undefeated Russian Khabib Nurmagomedov.

The retirement of Conor McGregor, who was the sport's most popular fighter, leaves a void in UFC. McGregor held featherweight and lightweight titles but hasn't won a fight since November 2016.

Nurmagomedov said this month he would like to fight again in September, two months after the end of his Nevada State Athletic Commission ban for his team's brawl with McGregor's team following their fight in October.

“Right now I'm the champ,” Poirier said, adding he hoped Nurmagomedov could return for a unifying fight that would remove the interim tag on his title.

“We've got a belt to fight for,” Poirier said.

For now, the interim title is worth celebrating for Poirier. Fans chanted for Holloway at times, but Poirier also had his share of fans.

“It's cool to prove it in front of all these people, but I had to prove it to myself,” Poirier said. “This means everything to me.”