Up to 2,500 fans allowed at Bell Centre for potential Leafs/Habs Game 6 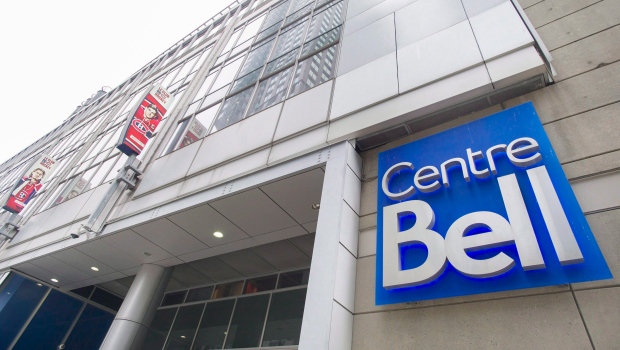 The Bell Centre is shown in Montreal, Thursday, March 10, 2016. THE CANADIAN PRESS/Graham Hughes

MONTREAL - A limited number of fans will be permitted in the Bell Centre to watch a May 29 playoff game between the Montreal Canadiens and Toronto Maple Leafs, should the series last that long.

The Quebec government announced Tuesday that indoor venues will be able to start hosting up to 2,500 patrons starting May 28 and that the provincial curfew will be lifted the same day.

“We are delighted with the government's decision regarding shows and events,” France Margaret Belanger, the Canadiens' executive vice-president and chief commercial officer, said in a statement.

“Although the number of spectators remains limited, we applaud this decision which allows us to foresee an eventual return to normality.”

Belanger said 2,500 people is about 12 per cent of the Bell Centre's capacity.

“We really missed our fans and spectators and we can't wait to host them again. And we will be ready,” she said.

The announcement of Quebec's reopening plan came mere hours after Dr. Howard Njoo, Canada's deputy chief public health officer, said allowing fans into games is not under “serious consideration” at this point in the COVID-19 pandemic.

“I would say if you look at that timing and what's the schedule for the NHL playoffs, which is taking place right now and into the summer months, it's not really something that's under serious consideration in terms of fans in the stands, just based on where we are with our vaccination campaign at this point,” Njoo said in Ottawa.

All of the American games so far in the playoffs have had fans, with a high of 12,000 for a Carolina Hurricanes home contest against the Nashville Predators on Monday night.

The NHL has had Canadian teams play exclusively in the country this year with no fans at any games. The Edmonton Oilers open the North Division playoffs against the Winnipeg Jets on Wednesday, while the Maple Leafs and Canadiens start their best-of-seven series Thursday in Toronto.

The winners square off in the second round before the Canadian survivor faces one of the three remaining American teams in the third round.

While Njoo did not see fans in attendance at Canadian playoff games, he said discussions are ongoing to determine if there can be cross-border travel in the third round and/or the Stanley Cup final.

“The live issue of course right now is what happens when we do get to the final four,” Njoo said.

Njoo said the federal government has had discussions with the provinces to figure out what might be possible.

The issue for the NHL is the 14-day quarantine for those coming in from outside Canada, which would be impossible during a best-of-seven series when one team hosts Games 1, 2, 5 and 7 and the other hosts Games 3, 4 and 6.

If the league and the country can't come to an agreement on a modified quarantine, the North Division winner could relocate to the U.S. after the second round.

Many Canadian professional teams in other sports with regular cross-border travel have played home games in the U.S. during the pandemic.

“I really do believe that the only possible silver lining in all of this is the people and the players have just a great appreciation for just how great fans are and the experience for the players, especially,” Maurice said.

“I think it makes a big, big difference.”

Major League Soccer's Montreal Impact (now CF Montreal) was the first Canadian professional sports team to have fans during the pandemic when 250 fans attended an Aug. 25 game against Vancouver.

This report by The Canadian Press was first published May 18, 2021.