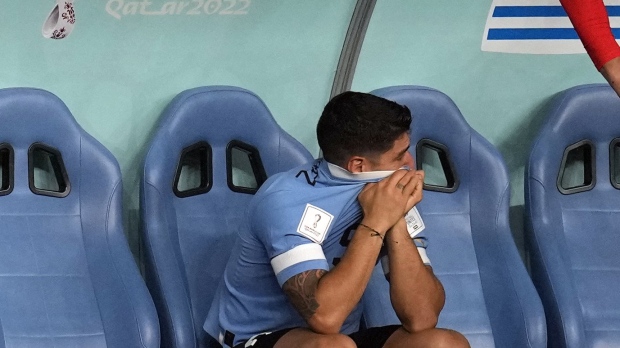 AL WAKRAH, Qatar — This time, Luis Suarez cried on the sidelines after Uruguay was eliminated from the World Cup despite a 2-0 win over Ghana on Friday.

The result also put Ghana out of the competition.

Suarez played a key role in both first-half goals scored by Giorgian De Arrascaeta and Uruguay appeared headed for the round of 16 after inflicting more pain on Ghana 12 years after their now-infamous meeting in the quarterfinals at the World Cup in South Africa.

Then, Suarez denied Ghana a winning goal with a deliberate handball on the goal-line and having been sent off, he celebrated wildly on the sidelines when Ghana missed the resultant penalty.

Uruguay was in a position to go through in Qatar until South Korea's late goal gave it a 2-1 win over Portugal in the other Group H game. That meant Uruguay needed to score one more goal in the dying minutes of its game to qualify.

It didn't and was eliminated because it had scored fewer goals than South Korea in the group stage. Suarez was distraught on the sidelines and covered his face with his shirt having been substituted in what was likely his last World Cup appearance.

Uruguay’s goals came in a six-minute spell soon after Ghana raised more memories of the 2010 quarterfinal by missing a penalty.

A Suarez shot led to De Arrascaeta’s opener and Suarez set up the second with a clever pass that De Arrascaeta volleyed in. After those two strikes, Uruguay thought it was on its way to the knockouts.

Ghana captain Andre Ayew, the team’s only survivor from the 2010 squad, had his penalty saved by Sergio Rochet in the 21st minute and the game changed immediately after that. De Arrascaeta scored in the 26th and 32nd minutes to crush Ghana hopes.

But the Uruguayans were ultimately also crushed.

Suarez had been substituted when the screen at Al Janoub Stadium suddenly flashed that South Korea was in second place in the group after a late goal against Portugal.

Uruguay surged forward in search of the goal that would have put it through. Substitutes Maximiliano Gomez and Sebastian Coates both missed late chances and Suarez was crying after the final whistle.