US runs past Canada into World Cup gold medal game 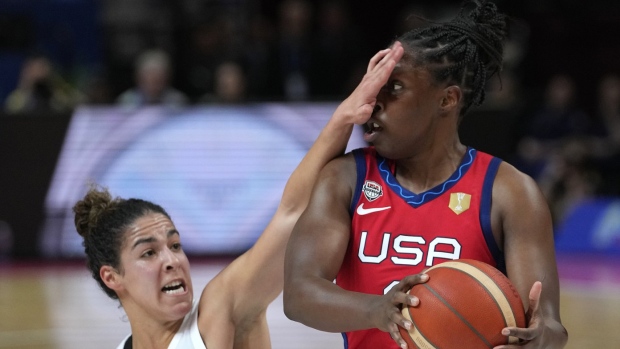 SYDNEY (AP) — Breanna Stewart and the United States used a dominant defensive effort to beat Canada and reach the gold medal game of the World Cup for the fourth consecutive tournament.

Stewart scored 17 points and the Americans raced out to an early lead to put away Canada 83-43 on Friday. The 43 points was the fewest scored in a semifinal game in World Cup history.

“Canada has been playing really well all tournament and the goal was just to come out there and really limit them,” said U.S. forward Alyssa Thomas. “We were really locked in from the jump with our game plan.”

The Americans will face either China or Australia, who played later in the day, for the gold.

“Our goal was to to win a gold medal and we're in position to do that,” U.S. coach Cheryl Reeve said.

The U.S. (7-0), which is on a record pace for points and margin of victory in the tournament, took control of the game early scoring the first 15 points. The Americans contested every shot on the defensive end as the Canadians missed their first nine attempts from the field. On the offensive end, Stewart, A'ja Wilson and Alyssa Thomas basically got any shot they wanted.

“I think after that punch, it really took the air out of them,” Thomas said. “They didn't know what to do with their offense anymore after that.”

Laeticia Amihere, who plays at South Carolina for former U.S. coach Dawn Staley, finally got Canada on the board nearly 5 minutes into the game making a driving layup.

By the end of the quarter the U.S. led 27-7. Canada had committed four turnovers — the same number the team had against Puerto Rico in the quarterfinals which was the lowest total in a game in 30 years.

The Americans were up 45-21 at the half and the lead kept expanding in the final 20 minutes. The win was the biggest margin for the U.S. in the medal round topping the 36-point victory over Spain in the 2010 World Cup.

Canada (5-2) advanced to the medal round for the first time since 1986 and has a chance to win its first medal since taking the bronze that year.

“We didn't get it done today, but what we're going to do is take this with what we learned today and how we can turn it up tomorrow," Canada captain Natalie Achonwa said. "It's still a game for a medal and it's just as important for us.”

The U.S. has won seven of the eight meetings with Canada in the World Cup, although the last one came in 2010. The lone victory for Canada came in 1975.

The victory was the 29th in a row in World Cup play for the Americans, who haven’t lost since the 2006 semifinals against Russia. The Soviet Union holds the World Cup record with 56 straight wins from 1959-86. This is only the second time in the Americans' storied history they've reached four consecutive gold medal contests. They also did it from 1979-90, winning three times.

This U.S. team, which has so many new faces on it, is on pace to break many of the team's records that include scoring margin and points per game. The Americans also continued to dominate the paint even without 6-foot-8 Brittney Griner, outscoring its opponents by an average of 55-24.

The low point total broke the mark of 53 that South Korea scored against Russia in 2002.

“We're starting to build that identity,” Wilson said of the defensive effort. “We're quick and scrappy and I think that's our identity.”

Kahleah Copper sat out after injuring her left hip in the win over Serbia in the quarterfinals. Copper landed hard on her hip driving to the basket and had to be helped off the court. She hopes to play on Saturday. Betnijah Laney, who also got hurt in the Serbia game, did play against Canada.