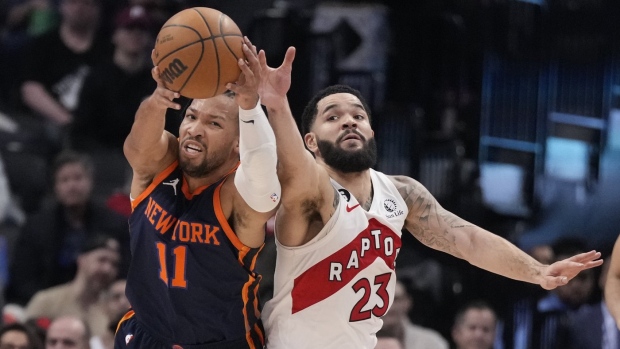 Fred VanVleet scored 28 points and the Toronto Raptors beat the New York Knicks 125-116 on Sunday, finally hanging on to a win after building a large early lead.

Gary Trent Jr. matched his season-high with six three-pointers for a 24-point night before fouling out in the dying minutes. Pascal Siakam also finished with 24 points, Scottie Barnes chipped in with 19, Chris Boucher scored 14, and Precious Achiuwa had 12 and 11 rebounds for the Raptors (21-27), in only their second victory in six games.

The Raptors had coughed up double-digit leads in their previous two games, losing to Minnesota after leading by 18 and then losing 106-104 to Boston on Saturday after being up 11.

Sunday's game looked headed that way after Toronto saw its early 17-point lead disappear in the third quarter. New York outscored Toronto by nine points in the frame and took a three-point lead with a minute left in the quarter. The score was 86-86 to start the fourth.

But Toronto opened the final period with a 13-3 run, and when Barnes hurled a long pass to Trent for a dunk with 8:50 to play, the basket brought the delighted Scotiabank Arena fans to their feet and put Toronto up by 11. A Trent three-pointer and then rebound and basket from Boucher restored a 16-point lead with 4:45 left, all but extinguishing any Knicks' hopes for a comeback.

Barnes' basket with 46 seconds left gave Toronto a 121-109 lead and sent hundreds of fans to the exits — this time because the victory was secure.

Led by Trent's perfect 3-for-3 from three-point range, the Raptors shot 63.6 per cent from behind the arc in the first quarter. VanVleet's pull-up three with 31 seconds left in the quarter saw the Raptors take a 17-point lead. They led 37-22 to start the second.

The Knicks chipped away at the difference in the second quarter, and Randle's three-pointer capped a 21-10 Knicks run that cut Toronto's lead to just five points. The Raptors went into the halftime break up 62-53.

Anunoby sat out the game with an ankle injury suffered in Saturday's loss to Boston.

"O.G. is day-to-day," coach Nick Nurse said. "We're still waiting on the MRI result he had earlier today. But day-to-day."

"I think RJ, from my experiences with him, is a really good teammate. He's a real pro. He leads by example. He practises hard. He's a guy whose teammates kind of gravitate to even though he's still pretty young. That's the biggest thing," Nurse said.

"He gives us a big wing presence. He can do multiple things on both sides of the ball. Can't have enough of those, really."

The Raptors tip off a season-long seven-game road trip on Wednesday at Sacramento.

The Raptors will travel to Golden State, Portland, Phoenix, Utah, Houston and Memphis before returning home.

This report by The Canadian Press was first published Jan. 22, 2023.