VanVleet has 36 points, Raptors stretch win streak to six with win over Miami 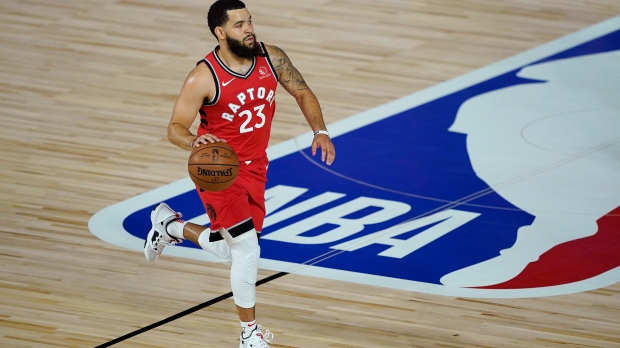 Toronto Raptors' Fred VanVleet (23) moves the ball up court against the Miami Heat during the first half of an NBA basketball game Monday, Aug. 3, 2020, in Lake Buena Vista, Fla. (AP Photo/Ashley Landis, Pool)

LAKE BUENA VISTA, Fla. - In the dying seconds Monday, Jimmy Butler bounced a pass intended for a basket-bound Goran Dragic for what would have been the game-tying two points.

Instead, Fred VanVleet lunged with water-bug speed to deflect the ball, securing the win for Toronto.

The Raptors backup guard known affectionately as “Steady Freddy” had a career-high 36 points and made seven three-pointers in Toronto's 107-103 victory over the Miami Heat on Monday.

But his defensive game was equally as impressive.

“What makes (his defence) unique is he doesn't look very fast out there, right? He doesn't move up and down the court that fast, but his lateral side-to-side speed and the way he can move his feet is incredible, and it's deceiving,” coach Nick Nurse said.

“You're seeing him bring the ball up the floor, running up the floor and you think 'Well, he's not that athletic or fast or quick or anything,' but his side-to-side athleticism is outstanding. . . He's just got great IQ, he anticipates, he's a step ahead sometimes.”

Pascal Siakam added 22 points, while Serge Ibaka had 15 and Kyle Lowry chipped in with 14 points and eight rebounds as the Raptors (48-18) stretched their win streak to six games, and improved to 2-0 in the NBA's restart after the COVID-19 hiatus.

Dragic had 25 points to top the Heat (42-25). Kelly Olynyk of Kamloops, B.C., had 17 points, two nights after a big game against Denver that saw him score 20 points in the fourth quarter of a 125-105 win. Jimmy Butler, who'd missed Sunday's practice sparking speculation he was in quarantine, had 16.

The Raptors, who were slotted into Monday's matinee spot because of the holiday in most of Canada, led by 17 points midway through the third quarter thanks to a 20-7 run and a virtual parade to the free-throw line led by VanVleet. Toronto took an 84-79 into the fourth.

Olynyk's three-pointer midway through the fourth put Miami up by three, but Siakam's three sparked a mini Raptors run, and when Lowry dished off a short pass to Ibaka for a dunk Toronto was back up by six with 6:11 to play.

Free throws from Lowry and VanVleet had Toronto up by six with 1:35 to play, but a Jae Crowder three-pointer and Dragic layup made it a one-point game with 41 seconds to play.

Lowry missed on a hard drive to the hoop, giving officials an earful afterward about what he thought was a missed call. Marc Gasol missed on a free throw that would've put Toronto up by three, but VanVleet deflected Butler's pass to seal the victory.

“We were switching everything and just kind of being prepared for a slipout,” VanVleet said of the play. “I saw Jimmy coming back, he likes to base cut there, so just trying to be another body at the rim, and then I saw Dragic make the cut, so just tried to beat him to the spot and I was able to get my hand on it.”

“(VanVleet) was making tough shots. You have to live with them,” Miami's Bam Adebayo said. “A lot of them were highly contested. He's been to the Finals. He made big plays in the Finals. He's just been doing what he's been doing.”

The Raptors' defence was that much better on Monday, and great preparation for the playoffs, Siakam said.

“It's good, going down to the wire,” he said. “All the games are not going to be easy, you're not going to win by 10, 15 points ahead, or whatever. But when those games get (close), and you've got to get stops to win the game, that's the important part. Just being that team that focuses on defence, and knowing how important our defence is to our game, it's good for us.”

Siakam, who'd struggled against the Heat, perhaps took it personally, hitting a trio of three-pointers and 15 points in the first quarter. His alley-oop dunk from Norman Powell, followed by an Ibaka three-pointer, sent the Raptors into the second quarter up 23-17.

Miami had a brief lead in the second, but the Raptors regained momentum with an 11-2 run, punctuated by a Lowry block on Herro's layup attempt, and capped by a Powell three. The Raptors led 48-44 at halftime.

The Raptors face the toughest opponents of the 22 teams in the NBA's “bubble” at Walt Disney World. But their big 107-92 victory over the Los Angeles Lakers - in which they held the Lakers to a season-low 35 per cent shooting - in Saturday's opener showed the Raptors aren't concerned.

Toronto plays Orlando on Wednesday, then Atlantic Division rival Boston on Friday. After that, Toronto will have four seeding games left before the playoffs.

Milwaukee's Mike Budenholzer and Oklahoma City's Billy Donovan were named co-winners of the NBCA's coach of the year as voted on by the NBA's 30 head coaches on Monday. Nurse, who is a favourite for the end-of-season coach of the year award, was one vote shy of making it a three-way tie.

“Those guys obviously did a great job,” Nurse said before the game. “You can't argue with the Bucks' record and how great OKC did after everybody had lower expectations for them.”

This report by The Canadian Press was first published Aug. 3, 2020.