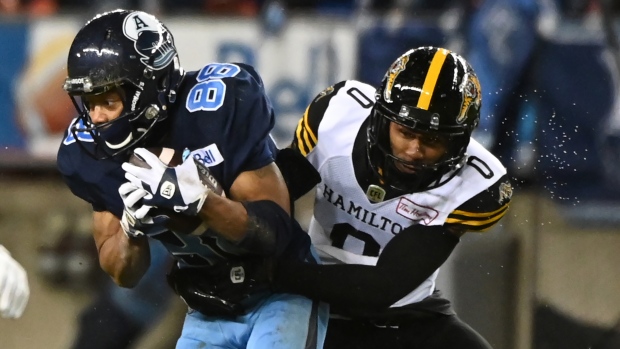 TORONTO - Veteran defensive back Ciante Evans is back in the Hamilton Tiger-Cats' starting lineup.

The Ticats listed Evans on their depth chart Saturday for their East Division final showdown against the Toronto Argonauts.

Evans didn't play in Hamilton's 23-12 East Division semifinal win over the Montreal Alouettes last weekend due to a quad injury.

Jeremiah Masoli will make the start, backed up by Dane Evans and David Watford, who comes into the lineup. The Ticats usually have only two quarterbacks on their game-day roster.

Receiver Bralon Addison will remain on the injured list. The Ticats activated Addison from the six-game injured list last week but he didn't play in their East Division semifinal win.

Addison has 18 catches for 231 yards in three games this season after recording 95 receptions for 1,236 yards and seven touchdowns in 2019.

Toronto listed quarterback McLeod Bethel-Thompson, linebacker Dexter McCoil Sr., and defensive back Jeff Richards in its starting lineup despite all three being in quarantine.

The three players, along with rush end Charleston Hughes and receiver Llevi Noel, all attended the Toronto Raptors' home game Thursday night in violation of the CFL's COVID-19 protocols.

All five were sent home by the club Friday.

Normally, the players would have to quarantine for four days and provide two negative tests before being able to resume team activities.

But on Friday, the CFL announced all five could play if they quarantined for 48 hours and provided three negative tests, the latest scheduled to be conducted Sunday.

If Bethel-Thompson does play, he'll make his CFL playoff debut after posting a 7-2 record as Toronto's starter this season. Veteran Antonio Pipkin will start for Toronto if Bethel-Thompson cannot play.

Hughes and Noel were both listed on Toronto's injured list for Sunday's game.

Toronto comes into the East final sporting a 6-1 record at BMO Field and having won three of four meetings this season against Hamilton.

This report by The Canadian Press was first published Dec. 4, 2021.