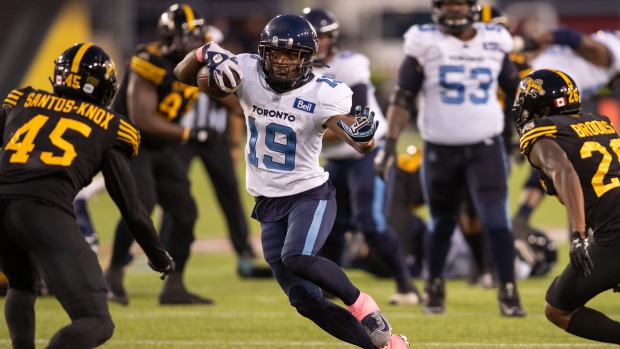 The script couldn't be better for linebacker Jovan Santos-Knox and the Hamilton Tiger-Cats.

Hamilton faces its arch rival, the Toronto Argonauts, in the East Division final Sunday at BMO Field. The contest is much more than just a grudge match for the Ticats, who with a win can secure home-field advantage for the Grey Cup on Dec. 12 at Tim Hortons Field.

“If you had told us this at the beginning of the season, I think all of our fans would be excited for it,” Santos-Knox said during a video conference Thursday. “I think everyone would be excited if they knew we were playing the Argos in the East final.”

“Locked in,” he said. “We're not changing what we've been doing, no one is too high or too low.

“Everyone is focused on what we did to get here â€¦ we're just locked in across the board.”

Toronto (9-5) won three of the four regular-season meetings with Hamilton (8-6) to finish atop the East Division. The Argos were 6-1 at BMO Field and 6-2 within the conference while the Ticats were 3-4 on the road and 4-4 versus division opponents.

Hamilton-Toronto matchups are always intense. But with a Grey Cup berth on the line, this contest is much more than just a grudge match.

“To me, it's an opportunity to go out there and get a win,” said centre Darius Ciraco. “It doesn't matter who we're lining up against.”

The 2021 season has been an interesting one for Toronto and first-year head coach Ryan Dinwiddie. The Argos alternated starting duties between veteran McLeod Bethel-Thompson and youngster Nick Arbuckle before dealing Arbuckle to Edmonton on Oct. 26.

Bethel-Thompson guided Toronto to three straight wins following the trade, including a 31-12 home victory over Hamilton that clinched the club first in the East Division. The Argos ended their season with a 13-7 loss to Edmonton (Arbuckle didn't dress) on Nov. 16, the last time they played an actual game.

And Dinwiddie is the East nominee for the CFL's top coach with Winnipeg's Mike O'Shea.

“I think they've hit their stride,” Hamilton head coach Orlondo Steinauer said of the Argos. “They've just found a way to win, obviously, because they have the bye and we'll be playing at their home field.”

The Ticats activated American receiver Bralon Addison from the six-game injured list last week but he didn't play in their 23-12 East Division semifinal win Sunday over the Montreal Alouettes. Steinauer said Addison didn't practise Thursday but didn't close the door on him playing against Toronto.

“I'm not going to rule him out because we know what his rehab process has been up to this point,” Steinauer said. “Whoever is out there, we're going to be very confident that we could win, whether it's with Bralon or without him.”

The five-foot-nine, 197-pound Addison has 18 catches for 231 yards in three games this season. Addison recorded 95 catches for 1,236 yards and seven touchdowns with Hamilton in 2019.

The six-foot-four, 292-pound Ciraco has battled a back injury this season but played the entire East Division semifinal. While Ciraco welcomes the chance to face the Argos, they're not why he's excited to return to the field.

“It's playoffs and no matter what, there's an added push,” he said. “If you need that extra little bit (playing a rival), I don't think it's the right push.

“I think it should be more the internal motivation of wanting to get back out there to help the team. They have a good front seven but I wouldn't say we're putting any more emphasis on one position or the other. We're working and getting as prepped for the game as we possibly can be.”

Toronto finished the regular season ranked sixth in offensive points (20.1 per game) and fourth in offensive touchdowns (27). But the Argos were third in both passing yards (261.7) and time of possession (30 minutes, 51 seconds).

“”He (Bethel-Thompson) is a great quarterback, he puts the ball where it needs to go,“ Santos-Knox said. ”Put it like this, he's a great point guard.

“He gets the ball to the guys that they need to make plays and gives it to them in the right spot. With the amount of weapons he has, we know he wants to distribute the ball evenly to his playmakers.”

And while Sunday's contest will undoubtedly feature its share of trash talk, White doesn't expect discipline to be an issue.

“No, it's football,” he said. “I think you just go out and play your game.