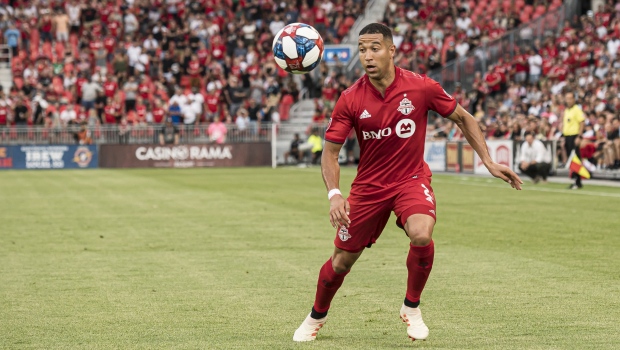 Toronto FC defender Justin Morrow (2) controls a pass during first half MLS action against the Houston Dynamo, in Toronto on Saturday, July 20, 2019. THE CANADIAN PRESS/Christopher Katsarov

TORONTO -- Justin Morrow cost Toronto FC some US$100,000 in allocation money when he came over in a December 2013 trade with the San Jose Earthquakes.

Back then, it was a fair chunk of change -- a source, granted anonymity because the league did not divulge allocation money transactions back then, confirmed the amount.

But what a return on investment. Morrow proved to be a winner on the field and a leader off it, helping breathe life into a moribund MLS franchise.

Now with retirement looming, the veteran fullback made it clear Friday that he is opening a new door rather than closing an old one.

He isn't quite sure where the future will take him. But he likes what he sees.

"I came to this decision knowing that my light is starting to shine brighter off the field than it is on the field right now," the 33-year-old from Cleveland said in his first comments since announcing his intention to call it quits at the end of the current season. "And with that comes a lot of joy.

"I've had some positive conversations and so hopefully it can work out and I get to stay."

Morrow's retirement announcement has drawn an outpouring of emotion from teammates.

"Just a true professional. A great role model," said midfielder Jonathan Osorio. "Somebody that went about his career the right way … It's been an honour for me to be his teammate the last eight years."

"It's hard to find words that will do Justin true justice -- in every way," said captain Michael Bradley, who joined the club less than a month after Morrow. "As a player, as a teammate, as a man … We're talking about a person of the highest character in every way.

"The role that Justin has played in this club, both on and off the field, it cannot be overstated," he added. "It's as simple as that."

After four seasons in San Jose, Morrow joined a Toronto club that had never had a winning season and had gone 6-17-11 in 2013.

At the time, the trade came with trepidation. He had won the Supporters' Shield, which goes to the team with the best regular-season record, with San Jose in 2012. And the move came just days before his wedding date.

"I remember being on the call and thinking 'My God, how am I going to tell my fiancee that were moving to Toronto?"' he recalled with a laugh, referencing his Paraguayan wife Jimena. "And then I thought about the way Toronto FC had been run as a football club during that time and I was afraid. I was afraid for my career.

"And it's been the biggest blessing of my life to get traded here. Not only to be in this city but to be part of this club and go through everything that we've gone through together."

Morrow said he decided in the off-season that this would be his final year as a player. A free agent then, he could have explored free agency but elected to re-sign for Toronto for an eighth season.

"I wasn't going to move anywhere. My family loves it here," he said.

Both of his daughters, Chiara and Lucia, were born in Toronto. Morrow feels his values are connected with those of the city.

"Very worldly. It gives me great joy to see all the different types of people that we have here. And the way that we care for each other. But also the way that they love their sports. That's something that's been near and dear. And something that I've lived day in and day out for the past eight years."

Morrow has already made a difference off the field in his role as executive director of Black Players for Change. He helped form the group during the tumultuous summer of 2020 when pro athletes joined the public in demanding social change.

The demands on Morrow were heavy.

"The amount of work that I've done in the past two years is probably unsustainable. I was literally working multiple jobs on top of trying to be there for my family. That's not the reason why I'm retiring, but to keep on with that pace would have been very difficult."

Morrow said while he will miss the camaraderie of the locker room the most, he has found something similar with Black Players for Change, "fighting with my peers off the field towards a common goal. There is a lot of joy in that."

Said Osorio: "On the field it's been amazing. It's even more amazing to see what he's done off the field."

A fixture at left fullback for most of his time with Toronto, Morrow could be relied on to be in the right place at the right time.

"He was here to bring stability to the backline, which he did in the first few years. Which is what we needed," said Osorio.

When deployed as a wingback, Morrow showed off his engine -- and ability to attack.

Growing up, he said he just wanted to turn pro. "Everything else has just been the cherry on top for me. I feel so blessed to have lived it."

He almost quit after his second season in San Jose, when he played just nine games.

His 246 appearances for Toronto in all competitions are second only to Osorio's 280. Over his career, Morrow has made 289 combined appearances (MLS regular season and MLS Cup playoffs) for TFC and San Jose, and earned four caps for the U.S.

For Bradley, it's a given that when Morrow takes the field, he's ready, able and willing "to give you everything that he has."

Named to the 2017 MLS Best XI, Morrow became the second TFC player to score a hat trick, in a 4-2 win over the New York Red Bulls in September 2017 to clinch the Supporters' Shield.

Morrow scored a career-high eight goals in league play that season. Toronto, which had already won the Canadian Championship, went on to win the MLS Cup that year.

Morrow also helped Toronto to the 2016 and 2018 Canadian Championships, secure the 2016, 2017 and 2019 MLS Eastern Conference championship, and was part of the team that finished runners-up in the 2018 CONCACAF Champions League.

He is one of just four players to have made more than 200 appearances for TFC, along with Osorio, Bradley and Mark Delgado.

Morrow has managed to take something out of what has been a disastrous season for the club this year.

"Yeah, maybe it's bittersweet to go out like this. But it's also something else that I have in my back pocket as a lived-life experience that I can lean on when I'm going through other tough times."

Whatever he does next, his family will be front and centre.

"Being a champion is a lifestyle. It's 24-7. It's not something that you stop when you walk off the training field … My family has felt that at times over my career. My beautiful wife has been standing with me from Day 1 in this journey. I'm ready to be her champion, I'm ready to be the champion at home, and help them."